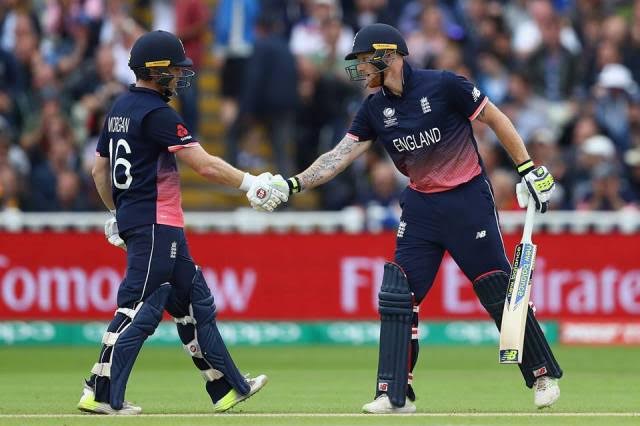 Australia lose to England, out of Champions Trophy

Chasing a target of 278, England started miserably in the first power play and was reduced to 35/3 at one stage of the match.


The partnership of 159 runs between skipper Eoin Morgan and Ben Stokes for the fourth wicket rescued the team to a decent position.

While Morgan was dismissed at 87, Stokes went on to score his hundred and remained unbeaten at 102 when rain interrupted the play.

Josh Hazlehood had the best bowling figure for Australia with 2/50 from nine overs.

Earlier,  after losing the toss, Australia came out to bat and boasting on the innings of Aaron Finch, Steve Smith and Travis Head, they could manage to set a target of 278 for England.

Travis Head was the top scorer for the Australian team with 71 off 64 balls, while Aaron Finch and Steve Smith played knocks of 68 and 56 respectively.

None of the lower order batsmen could contribute to the scorecard and the continuous loss of wickets reduced the Aussies to only 277.

Mark Wood and Ben Stokes were phenomenal with the ball and clinched four wickets each of the Australian batting line up.

Australia's loss in this match enabled Bangladesh to qualify for the semi final, who defeated New Zealand last night.

England qualified for the semis even before this match from Group A.