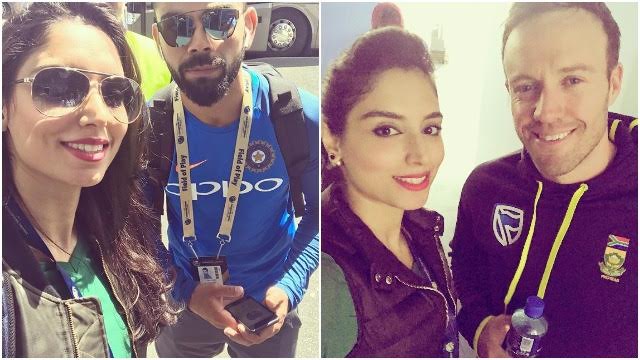 Zainab Abbas, a Pakistani sports journalist, uploaded a picture first with Virat Kohli and later with AB de Devillers, which has raised a storm on Twitter.

Had to be done! @imVkohli pic.twitter.com/D8kGzwROik

Both Kohli and de Villiers went out for a duck in their respective next games, which was not accepted well by some cricket lovers and accused the presenter for 'casting a spell'.

Zainab was seen to share a picture with the South African captain on Instagram four days back and he too went out for a duck against Pakistan in his next match.

Clive, a Twitter user on June 8 said: "Starting a petition to ensure @ZAbbasOfficial stays away from all the other Indian batsmen during ICC events."

Starting a petition to ensure @ZAbbasOfficial stays away from all the other Indian batsmen during ICC events.

Hemant, however, directly held Zainab responsible for the ducks by two skippers, as he said: "The curse of the @ZAbbasOfficial selfie strikes again...Kohli goes for a duck now..Devilliers yesterday #INDvSL #CT17."

A Pakistani supporter, however, mocked the entire episode to say "Please. Next selfie with Angelo Mathews. Must get this done before Pakistan vs Srilanka."

Please. Next selfie with Angelo Mathews. Must get this done before Pakistan vs Srilanka.

India had lost their encounter with Sri Lanka on Thursday, in which Kohli went out for a duck.

Now, the two captains, who went for a duck in their last games, are ready to face off in a crucial match on Sunday. India will be eyeing on to win the battle to reach the semi finals.