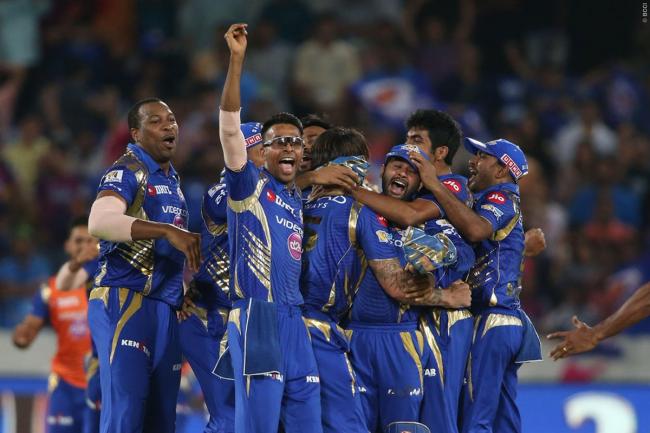 With just 11 runs needed in the last over for victory, skipper Rohit Sharma handed over the ball to Australian pacer Johnson.

Johnson bowled one brilliant over as he picked up wickets of Manoj Tiwary (7) and RPS skipper Steve Smith (51) to script a memorable victory.

Pune made a patient start and looked determined to sail the team to victory with Ajinkya Rahane playing a sensible knock after losing the initial wicket of Rahul Tripathi (3).

But after Rahane (44) departed, Steve Smith started to take the task of carrying the duty of taking the side towards victory on his shoulder.

Smith's departure in the last over ended all hopes for Mumbai fans.

MS Dhoni contributed 10 runs with his willow and failed to deliver for his side on this crucial evening.

Mumbai Indian bowlers were brilliant on Sunday night to help their side defend a low total.

Jaydev Unadkat gave early troubles to Mumbai batsmen as he picked up wickets of both the openers-Parthiv Patel (4) and Lendl Simmons (4) to make the side struggle at 2-8.

Unadkat picked up a brilliant catch on his own bowling, probably one of the best in the tournament so far, to get rid off Simmons.

Ambati Rayudu (12) and Rohit Sharma (24) departed at a point when it seemed that they were shaping up a partnership after the initial jolts.

It was  Krunal Pandya and his heroic efforts till the end which gave some hopes to Mumbai.

It was his magnificent innings of 38-ball 47 that helped Mumbai post 129 runs for the loss of seven wickets in 20 overs.

He hit three boundaries and two sixes in his knock.

Washington Sundar bowled brilliantly as he gave away only 13 runs in his tight four overs.

Mumbai Indians won the title for the third time in the history of the tournament which turned 10 this year.