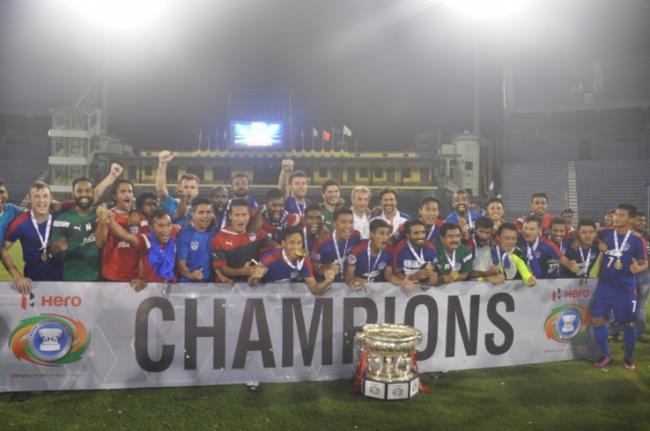 India Blooms News Service | | 21 May 2017, 10:43 pm
#BengaluruFC, #FedCup, #MohunBagan
Cuttack, May 21 (IBNS): JSW Bengaluru FC were crowned champions of the 38th edition of the Hero Federation Cup after the Blues defeated Mohun Bagan 2-0 at the Barabati Stadium in Cuttack, Odisha on Sunday.

In a final largely dominated by Bengaluru FC, Alberto Roca’s men left it late to finish proceedings as C.K Vineeth's 107th and 119th minute strike proved to be the difference between the both sides.

Adopting the motto of ‘attack is the best defence’, Bengaluru FC wasted little time in formalities and held no bars in going for the early goal. In the 1st minute itself, the intent was clear when Eugeneson Lyngdoh’s cross from the flank that was intended for Udanta Singh in the box was caught by the Mariners’ custodian Debjit Majumder.

Fluidity from the flanks proved to somewhat threaten the Bagan defence line and Udanta Singh loomed around the wings and the box to add to that growing threat. In the 17th minute, the Bengaluru FC forward cut in from the left flank and could only earn a corner after his shot ricocheted off Pritam Kotal.

Three minutes later, Udanta connected directly from a Eugeneson corner kick and his shot crept into the back of the net, but the referee flagged the play for offside. In the 22nd minute, the lanky forward was at it again. This time he produced a cheeky back-shot to catch Debjit Majumder off-guard, but the Mariner’s custodian stood up to the challenge.

Bengaluru FC rued their luck in the 49th minute when Juan Fernandez’s shot from a corner kick went into the back of the net, but the referee flagged the play offside, as the Blues continued to press for a breakthrough.

In the 55th minute, Balwant Singh’s shot from outside of the box after a Sony Norde ball earned a top class save by Amrinder Singh. However, Roca’s men shrugged off a counter and a minute later, Udanta Singh came close to giving them the lead after he latched onto a through ball but could only chip the ball over the net in an attempt to beat an onrushing Debjit Majumder.

In the 63rd minute, Sanjoy Sen made an attacking change and introduced forward Jeje Lalpekhlua in-place of midfielder Shouvik Chakrabarti. That had little effect on the game, as Bengaluru FC continued to dominate and foster chances.

Harmanjot Khabra’s shot flew whiskers past the goal after a Eugeneson free-kick had ricocheted off the wall and fell on to his stride in the 76th minute. Three minutes later, substitute Cornell Glenn’s curling shot came close to taking the lead for Bengaluru FC after he had tried his luck from distance.

Mohun Bagan had a golden opportunity to score in the dying embers of the match when in added time, Jeje failed to score from handshaking distance after Sony Norde’s corner had caused a meele in the box. The full-time scoreline read 0-0 as the game progressed to extra time.

In the 92nd minute, Cornell Glenn’s shot rattled the Mohun Bagan woodwork but came back into play and a minute later CK Vineeth’s attempt from distance went over the bar as Alberto Roca’s men pressed. Vineeth missed a sitter in the 105th minute after a Sandesh Jhingan cross from the right flank had found him clear on the far post.

Better late than never, and Bengaluru FC’s breakthrough came in the 107th minute when CK Vineeth’s shot from outside of the box took a deflection and went into the back of the net to give the Blues a solitary goal lead. Vineeth added another to his goal scoring tally in the 119th minute when he finished a counter attack to safeguard Bengaluru FC's lead.


The Blues’ defence stood strong and Amrinder was forced to make some easy saves, but nothing threatening, as Bengaluru FC lifted the coveted trophy.