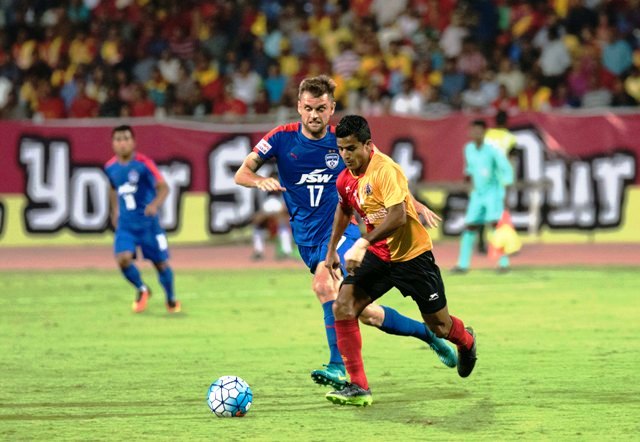 Chennai City FC slumped to their second defeat of the Tournament and find themselves at the bottom of the table. Meanwhile, strikes from Robin Singh (45+1’, 76’) led the Red and Golds to a hard-earned win over the Southern outfit.

Kingfisher East Bengal pressed for an early goal and almost took the lead in the 6th minute when Narayan Das’s header was cleared off the lines after Karanjit Singh had come out of the line to punch clear a dangerous cross. Seven minutes later, Robin Singh’s left footed shot from 25 yards earned a world class save from Karanjit to keep Chennai City FC in the game.

The Red and Golds turned on the style and piled pressure on the Chennai defence line; courtesy of attacks led by Robin Singh from the front and Wedson Anselme from the wing.

Chennai City FC recouped from soaking pressure and with Soundarajan’s team committing in midfield, Kingfisher East Bengal were kept at bay. Entwined in a battle of possession, with neither emerging victor it took a mistake Chennai City FC to open the goal gates.

In the dying embers of the first half, Robin Singh capitalised on an uncanny clearance from the Chennai City FC defence and scored from inside the box to give Kingfisher East Bengal the lead going into half-time.

Soundarajan’s men looked more comfortable on the ball once the second half kicked-off and attacked with fluidity, not that they were able to score the equaliser but the intent was there. In the 53rd minute, Debabrata Roy’s free kick rattled the crossbar.

Clear goalscoring chances became rare for both teams as both trod with caution. The play became largely confined to the midfield with little spells enjoyed by either team in the final third – though for Chennai City FC lack of manpower up front prevented a clear scoring opportunity, while for Kingfisher East Bengal, the Chennai defence made life difficult.

In the 72nd minute, Karanjit made a save to deny Robin’s header from close range and the Red and Golds searched for a goal to extend their lead. The second goal came in the 76th minute when Robin Singh converted from the spot after Ravanan’s handball in the box had prompted the referee to give the penalty kick.

A healthy lead of two goals all but ensured Kingfisher East Bengal of the win and at the end of time, the scoreline read 2-0 in their favour.