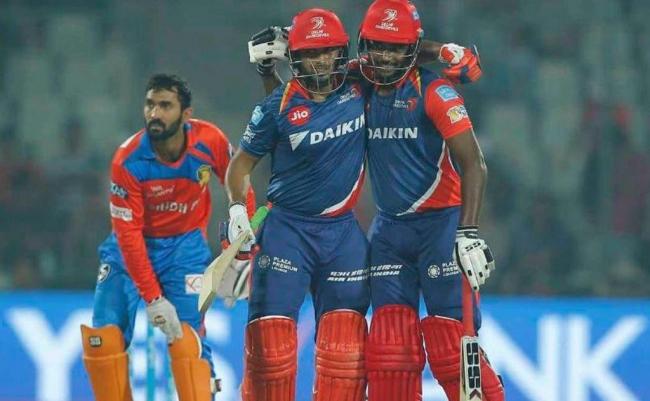 India Blooms News Service | | 05 May 2017, 10:50 am
#RishabhPant, #IPL, #DelhiDaredevils, #SachinTendulkar, #SouravGanguly, #VVSLaxman, #RaviShastri, #VirenderSehwag
Mumbai, May 5 (IBNS): The cricketing fraternity went berserk as a young Rishabh Pant scripted one of the finest victories for his Indian Premier League side, the Delhi Daredevils, against their encounter with the Gujarat Lions on Thursday in the Feroz Shah Kotla ground.

Chasing a target of 209 runs in 20 overs, Pant, who walked into bat with his side trailing at 24 for the loss of one wicket in the third over, bludgeoned nine sixes and six fours in his innings of 97 runs off 43 balls.

The 20 year old paired up with another youngster, Sanju Samson, and forged a partnership of 143 runs for the second wicket, as their side romped to a victory with 15 balls to spare.

Samson too hit a breezy 61 off 31 balls, hitting seven sixes.

The Samson-Pant pair sent the visitor's bowlers for a leather hunt following a sensational batting display by the Gujarat Lions.

The Lions' skipper Suresh Raina scored 77 runs of 43 balls, albeit with three chances he received from the Delhi fielders, and was instrumental in his team's mammoth total of 208 runs as he too forged a partnership of 133 runs with wicketkeeper-batsman Dinesh Karthik, who essayed a fluent knock of 65 runs off 34 balls.

If the Karthik-Raina partnership was the highlight in the first half of the game, Pant and Samson's was the talk of the town following the conclusion of the match.

The duo tonked sixes at will, sharing 16 among themselves as their side hit a massive 20 sixes in the match.

Pant, relentless in his pursuit, hit season campaigner James Faulkner for three sixes in the 11th over, making a mockery of the latter's widely revered skills of bowling in a T20 game.

As praises poured from all corners, former Indian cricketer and a legend of the game, Sachin Tendulkar termed Pant's innings as the best he's seen throughout the 10 years in IPL history.

"One of the best Innings I have seen in the IPL & that includes all 10 seasons. @RishabPant777," the Bharat Ratna awardee tweeted.

Former India captain Sourav Ganguly urged the selectors to keep an eye on Samson and Pant.

"Rishabh pant,Sanju Samson ...tonite wow..keep an eye on them teams ...they are special..," the Dada of Indian cricket tweeted.

"Love batsman with tremendous belief in themselves which is backed by a special ability for ball hitting.Extra Special today frm Rishabh Pant," Sehwag tweeted.