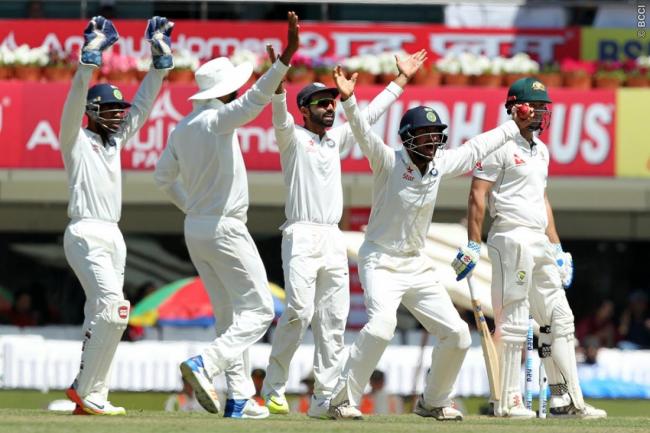 After a masterclass from Cheteshwar Pujara, who returned to the hut not before compiling a double century, the third in his career and second against the Aussies, and another century from Indian wicket-keeper Wriddhiman Saha, Ravindra Jadeja smacked a breezy half-century, helping India secure a healthy lead in quick time.

The southpaw further dented the Aussie camp with two quick wickets to leave the visitors reeling, as they now have to put out the 120-odd-run deficit to avoid another innings loss.

At the end of fourth day's play on Sunday, Australia have put on 23 runs for the loss of two wickets.

They trail the homeside by 129 runs.

Riding on the partnership of Cheteshwar Pujara and Wriddhiman Saha, who added 199 runs for the seventh wicket, India not only toppled Australia's first innings score, but ended up surging 152 more than their counterpart's.

His partner Wriddhiman Saha played 233 balls for his 117 runs.

Saha's innings was encrusted with eight boundaries and a six.

Follwoing the departure of the centurions, Jadeja went hammer and tongs against the Aussie bowling, scoring an unbeaten 54 runs of 55 balls.

The ICC's numero uno Test bowler hit five fours and a couple of sixes enroute to his knock.

Starting their innings with a deficit of 152 runs, Australian vice captain David Warner started off in an attacking fashion but Jadeja drew first blood as he enticed the southpaw to come forward, only to castle his off stump.

Warner's 16-ball stay yielded 14 runs, 12 of which were collected from boundaries.

With over 15 balls remaining in the day's play, the Aussie ploy of sending in nightwatchman Nathan Lyon too backfired as Jadeja got one to drift to fly past Lyon's blade and pef the off stick.

Matthew Renshaw will resume batting on seven runs when play starts on Monday.