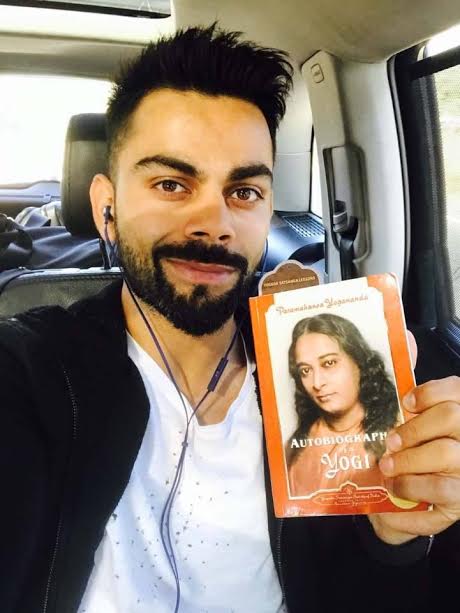 India Blooms News Service | | 20 Feb 2017, 10:56 pm
#Virat Kohli, #Source, #Inspiration, #Autobiography of a Yogi
Kolkata, Feb 20 (IBNS): Ace cricketer and Captain of the Indian Cricket Team Virat Kohli professed his love for Sri Sri Paramahansa Yogananda's autobiography of a Yogi calling it a 'must read for all those who are brave enough to let their thoughts and ideologies be challenged.'

He added ‘The understanding and implementation of the knowledge in this book will change your whole perspective and life.’

A week prior to that, Virat also posted an inspiring quote by Sri Sri Paramahansa Yogananda saying ‘If only all of us were able to follow these divine and beautiful words this world would be a much better place for everyone.’

Recently, Superstar Rajinikanth also shared his reverence for the Spiritual Guru at the launch of the Tamil translation of the book Divine Romance by Paramahansa Yogananda. ‘My Guru is Sadchidananda. My Satguru is Paramahansa Yogananda. Param Guru is Mahavtar Babaji and Param Gurus are Lord Krishna and Jesus Christ. This is my Guru Parampara or Order’ said the Superstar.


Sri Sri Paramahansa Yogananda has played a pivotal role in the spread of Yoga worldwide with over a million followers practicing his Kriya Yoga Meditation techniques today. His “Autobiography of A Yogi” has been translated into 45 worldwide languages, including 12 Indian languages and is known to be the only book that Steve Jobs downloaded on his iPad.

Some of the earlier followers also include George Harrison, lead guitarist of The Beatles and celebrated Indian musician, Ravi Shankar. The father of our nation Mahatma Gandhi and Yoganandaji met in 1935, and at the Mahatma's re­quest, Yogananda in­structed him and several of his followers in the spiritual science of Kriya Yoga. The award-winning documentary feature film, AWAKE: The Life of Yogananda, premiered last year and has been shown worldwide.

Sri Sri Paramahansa Yogananda founded Yogoda Satsanga Society of India (YSS) in 1917, a non-profit organization that has since been working to disseminate the science of Kriya Yoga Meditation to seekers all over the world. This year marks 100 years of YSS, which was founded in 1917, has centers all over the world.