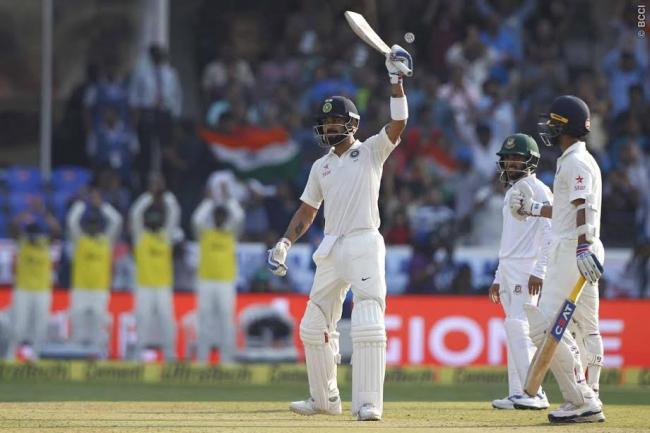 At tea, the Indian batsmen have put on 620 runs for the loss of six wickets.

Kohli brought up his fourth double century with a boundary, much like he did to reach the three-figure mark on Thursday.

By virtue of his feat, Kohli surpassed the likes of Sir Donald Bradman and Rahul Dravid and became the first batsman to score at least one double hundred in four consecutive series.

Bradman and Dravid has three each.

The Indian skipper hit 24 boundaries in his 246-ball innings.

Following Kohli's departure, Wriddhiman Saha and Ravichandran Ashwin forged together a 74-run partnership, before the latter departed for 34 runs.

Saha however played on and completed yet another half-century.

Together with Ravindra Jadeja, Saha has put up an unbeaten 51 runs for the seventh wicket.

For Bangladesh, Taijul Islam leads the chart with three wickets, followed by Mehdi Hasan, who accounted for Kohli's scalp and Taskin Ahmed, who picked up a solitary wicket.