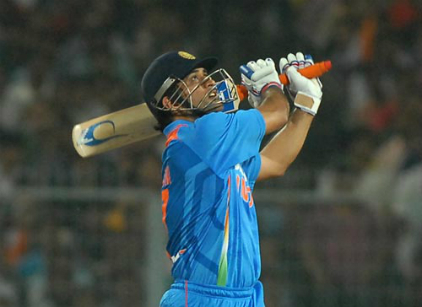 India Blooms News Service | | 19 Jul 2014, 12:28 am
#India England second test, # Gary Ballance century England India
London, July 18 (IBNS): The second Test between India and England is witnessing a tough fight between the two sides to gain control over the match as the visitors took two quick wickets to make the hosts finish the day's play at 219 for six at the Lord's here on Friday.

After India were all out at 295 on Friday, the visitors gave some early blows to reduce England to 113 for four.

Bad form continued for skipper Alaister Cook (10) as he was dismissed early by  Bhuvneshwar Kumar.

Sam Robson (17) and Ian Bell (16) all were dismissed by Kumar as the young Indian pacer continued his good form in the match by claiming 4-46.

Ishant Sharma and Mohammed Shami gave him good support on the other end. Both of them, however, did not pick up a wicket.

Ravindra Jadeja picked up the wicket of first Test's hero Joe Root (13) to dismiss the fourth wicket of the home side.

It was Gary Ballance, who played a much needed knock of 110 runs, top stabilize the innings.

He hit  15 boundaries in his calculative knock.

He dragged England out of danger but could not complete task for the side as he was dismissed by Kumar in the fag end of the day.

Even Murali Vijay took a wicket of Moeen Ali (32).

Liam Plunkett (4*) and Matt Prior (2*) will resume the innings on Saturday.

Ballance and Ali had added 98 runs in the fifth wicket which pulled the team out of crisis.

On Thursday,  India recovered from 145-7 to 290-9 on a bowling friendly wicket. England took the final wicket at early hours on Friday.

The first Test had ended in a draw.