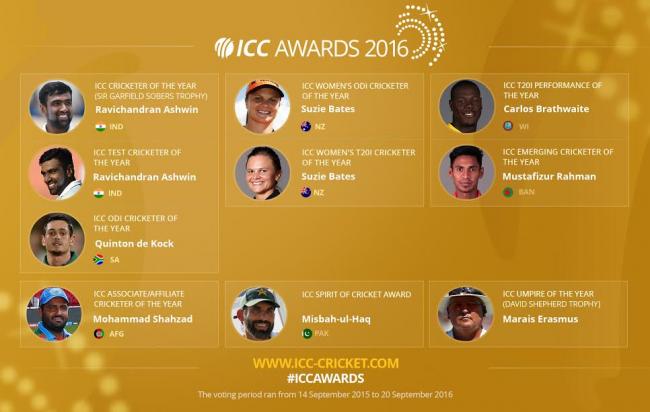 Ashwin had finished 2015 as the number-one ranked Test bowler in the world, a position he twice reclaimed in 2016.

Reacting to the news, a delighted Ashwin said: “It’s an absolute pleasure to be awarded with this great honour. It feels great to follow the likes of Sachin Tendulkar and Rahul Dravid in being named as the ICC Cricketer of the Year. To also win the ICC Test Cricketer of the Year makes it even better.

“There are a lot of people to thank for this wonderful achievement I have made. It has been a great couple of years but this year has been even more special. What is very noticeable is the way I have bowled and batted and the way I have gone about doing my business. What is more important, as far as I am concerned, is the number of people who have gone behind my success.

“I’d like to dedicate this award to my family. I’d like to thank ICC and most importantly my team-mates. I’d also like to thank the support staff for our success. We’ve had a great transition ever since Mahendra Singh Dhoni hung up his boots. A young captain has taken over, we fell on the right track, and we now have a new bunch of boys.”

ICC Chief Executive David Richardson congratulated Ashwin, saying: “It has been a memorable period for Ashwin, whose consistent all-round and match winning performances have been reflected in the MRF player rankings. He is justifiably now being counted among the best spinners of his generation.

South Africa’s wicketkeeper-batsman Quinton de Kock has been named as the ICC ODI Cricketer of the Year.

In the voting period, de Kock scored 793 runs in 16 ODIs with four centuries and a half-century.

He averaged over 56 and held a strike-rate of just under 98.

With the gloves, de Kock dismissed 15 batsmen behind the wickets.

A happy de Kock said: “It’s great to hear that I’ve been named as the ICC ODI Cricketer of the Year. To be named as the best from among so many good cricketers gives one utmost satisfaction.

“This award obviously rewards consistent performances at the top level and I’m happy to have done well for my team over this period. To join a select group of players that include my senior AB de Villiers makes this a special moment, one that I’ll cherish for long. I thank the ICC for selecting me for this award and to my team-members and support staff for all their help and support.”

Carlos Brathwaite of the West Indies has won the ICC T20I Performance of the Year award for his match-winning 34 not out off 10 balls in the ICC World Twenty20 India 2016 final against England in Kolkata.

The innings included four consecutive sixes in the final over, which helped the West Indies snatch victory from the jaws of defeat.

The 24-year-old from Barbados is the first West Indies cricketer to win this award.

Reflecting on that innings, Brathwaite said: “I graciously accept this award. I want to thank God and I also want to say a huge thanks to my family. Special mentions go to Marlon Samuels for a fantastic knock in the finals that got us to the position where we were. I also want to make a special mention of the West Indies’ women’s team and the West Indies’ under-19 team, who together helped cap off an incredible 2016 for West Indies cricket.

“I always dreamt of hitting the final ball of a game for six to win it. Never in my wildest dreams could I imagine hitting four consecutive sixes to win the World Cup (ICC World Twenty20) final for the West Indies.”

In the period under consideration, Mustafizur played three ODIs and took eight wickets, while he yielded 19 wickets in 10 T20Is.

He is the first Bangladesh cricketer to win an annual ICC award.

Mustafizur commented: “This award is the best gift of the year for me and will encourage me to do even better in the coming years. I’m delighted and proud to win this award, especially since it’s the first time that a Bangladesh player has won an ICC award.

“To play international cricket is the dream for every budding cricketer and it has indeed been a dream come true for me too. I want to thank everyone who has supported me over the years and promise to give my best at every opportunity.”

Afghanistan’s flamboyant wicketkeeper-batsman Mohammad Shahzad has been named as the ICC Associate and Affiliate Cricketer of the Year after he finished as the leading ODI run-scorer with 699 runs in 16 one-day matches.

He is the first Afghanistan player to win this award which serves to recognise and reward the efforts in all international matches of outstanding cricketers from teams outside the 10 Test nations.

ICC Men’s Teams of the Year 2016 (in batting order, selected by Rahul Dravid, Gary Kirsten and Kumar Sangakkara based on players’ performance in the period from 14 September 2015 to 20 September 2016):