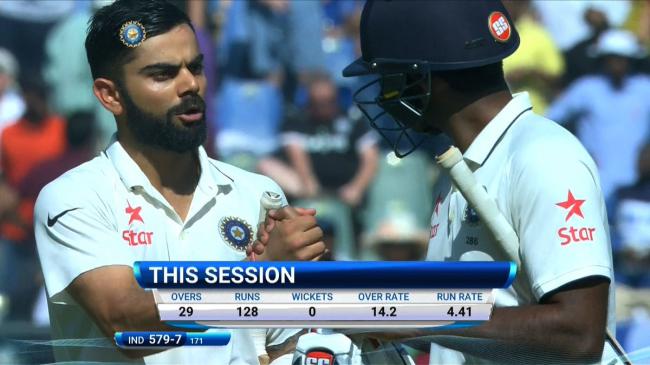 India Blooms News Service | | 11 Dec 2016, 05:55 pm
#Virat Kohli, #India, #England, #Adil Rashid, #FourthTest
Mumbai, Dec 11 (IBNS): After riding on skipper Virat Kohli's heroic 235 runs India took a massive lead of 231 runs, the bowlers played their part strongly to put the home side on the driver's seat in the fourth Test as England were left struggling at the end of the fourth day's play at 182 for six here on Sunday.

Jonny Bairstow, struggling at 50, remained unbeaten, as England are trailing India by 49 runs.

Joe Root (77) and Bairstow tried to give some challenge to the home side by posting 92 runs in the fourth wicket partnership.

Jayant Yadav, who earlier hit the century, got rid off to Root to put things much into India's favour.

Ashwin picked up the wicket of nightwatchman Jake Ball in the what stood as the last ball of the day to left England struggling at 182 runs.

Ravindra Jadeja and Ashwin picked up two wickets each as England struggled against a spirited India which performed strongly both with the bat and ball.

Earlier, Kohli smashed 235 runs off 340 balls and Yadav hit 104 runs as India put up a massive fight against England on the fourth day to finsih the innings at 631 runs.

Kohli and Yadav added 241 runs in the eighth wicket partnership which proved to be vital as it helped India put up 631 runs on the scorecard.

Adil Rashid picked up four wickets in the match for England.

India have already taken 2-0 lead in the series.