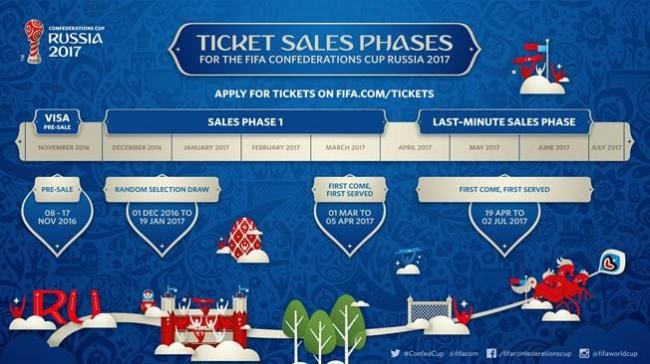 Tickets for all 16 matches, including category 4 – which is reserved exclusively for Russian residents – will be available for fans who want to watch the 'Tournament of Champions' live at the stadiums.

It is important to note that it makes no difference as to what day or at what time people apply for tickets, as during this sales period, everybody has an equal chance, irrespective of whether they apply on the first or the last day.

All applications will be collected at the end of the sales period, with a draw to be conducted in the event of any matches being oversubscribed.

The reason for having this random selection draw is simple – FIFA wants to give every fan an equal chance of getting tickets to the most popular games, and such draws are the fairest way of allocating the available tickets.

Confirmation as to whether an application has been successful, partially successful or unsuccessful will be provided no later than Feb 28, 2017.

Payment will only be taken if and when tickets are allocated.

Following the random selection draws and once fans receive confirmation that tickets have been successfully allocated to them, they can apply for their fan ID at www.fan-id.ru.

Each fan needs to obtain only one personalised fan ID to enjoy all matches for which he/she has purchased tickets.

The Official Draw in Kazan on Nov 26, 2016, threw up some intriguing pairings that promise some great action out on the pitch.

Group A features Russia, New Zealand, Portugal and Mexico, and Group B contains the African champions plus Chile, Australia and Germany.

The identity of the African team will be revealed on Feb 5, when the champions of the CAF Africa Cup of Nations are crowned.

The detailed match schedule is available on FIFA.com.

“With the draw completed, the dream of fans is becoming a reality as they can now embark on their tournament preparations – starting with applying for tickets,” explained Falk Eller, Head of FIFA Ticketing.

"The Tournament of Champions is a great opportunity for fans to watch the confederations’ best teams, the reigning world champions, and hosts Russia on the very same stage that will host the FIFA World Cup the following year. Fans will not want to miss out on this event come next June and July," Eller added.

During the Visa pre-sale period, 48,504 tickets were sold.

Fans can purchase up to six tickets per match, up to a maximum of ten matches.

In addition, venue-specific ticket series are available, enabling fans to watch all matches in one Host City.

The only exception is the Saint Petersburg venue package, which does not include the final.

The total number of tickets that fans can apply for is 60 per household.

The tickets will be delivered by courier service free of charge as of April 2017.

Special-access tickets will also be available for disabled people and people with limited mobility.