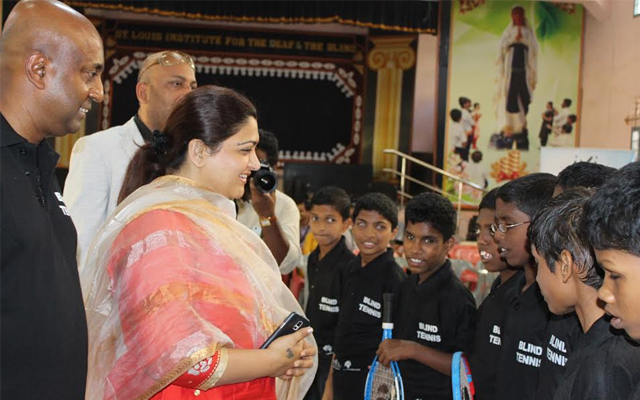 Twenty blind and visually impaired students played a demo match as part of the launch event from 2 to 3 pm at their school in the presence of Brother John Xavier, Headmaster & Correspondent and other attendees.

“This is the first time ever that the sport of blind tennis has been played in India. Almost identical to standard tennis, blind

Another modification is that more than one bounce is allowed before returning a volley.” said Vinod Daniel, CEO, IVI.

“An interesting feature of this sport is that both blind and sighted participants can play against each other”, he added.

He also stated, “IVI is glad to bring these children this new experience, which is something taken for granted by those of us with sight. We hope that this will become a habitual activity for them that is enriching and beneficial in the long term. Thanks to Rick Shrowder for coaching the children and the Australia-India Council (AIC) for making this possible.” Nawabzada Mohammed Asif Ali said, “This is a noble initiative by IVI and Global Community Sports to empower blind and visually impaired children. I am happy that they have brought this initiative to India.”

Rick Shrowder said, “A disability does not have to be restricting or isolating. This event is an excellent way to demonstrate this to both the normally sighted and visually impaired. I am thrilled to have coached the kids and look forward to blind tennis becoming a regular activity at this school and elsewhere in the country.” Originally from Adelaide, Australia Rick has been coaching young people in the UK since 2003 and has been involved in national and regional sports coaching, particularly Australian Rules Football.