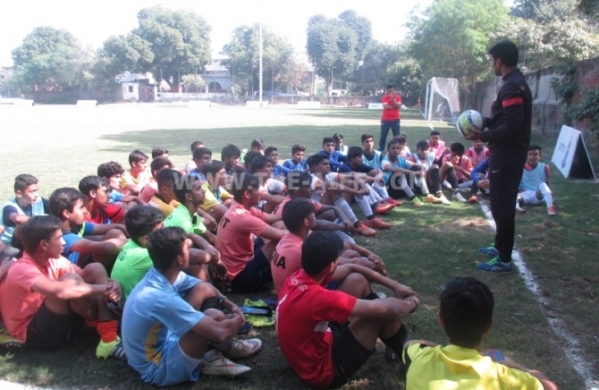 India Blooms News Service | | 23 Nov 2016, 01:14 pm
#AIFF, #Football, #FootballCamp
New Delhi, Nov 23 (IBNS): A National Team of any country is the product of the Players available in the Countryâ€™s pipeline. And with India gearing up to participate in its first ever FIFA World Cup, the FIFA U-17 World Cup 2017 India, the All India Football Federation is scanning every nook and corner of the Country for potential talent to increase the flow of Players in the Nationâ€™s pipeline, an official release stated.

Keeping in mind the FIFA U-17 World Cup 2017 India next year, the All India Football Federation revamped the U-15 Youth League to the U-16 Youth League to setup an efficient scouting network. With each of the Clubs in the U-16 Youth league being invited to send in three of their best Players, the AIFF is leaving no stone unturned to scout talent.

The two-day scouting camp in the Capital, which concluded today, (November 23, 2016), saw enthusiastic participation from some of the top talents in the Nation.

AIFF’s Director of Scouting and former Indian International Abhishek Yadav agrees and believes that the Scouting Camps will not only help identify talent, but will act as a value addition to the U-17 World Cup Squad by expanding the base of the Player pyramid structure.

Speaking to www.the-aiff.com on the sidelines of the Scouting Camp in the Capital, Yadav said, “Some of our Players in the U-17 World Cup Squad have been found out through scouting and we have to unearth talent in order to add to the ranks of the Indian squad”

“Every stakeholder plays an important role when we host the FIFA U-17 World Cup next year and it is the onus of the Clubs to send us their best Players so we can take a look at them”, he added.

50 Players were called for the first day of the Scouting Camp in the Capital and on the second day the number was trimmed down to just 25. “We are searching for quality not quantity. The Players need to be gifted technically if they are to catch our eye”, Yadav justified.

“We will scout vigorously for talent in the Nation. We will leave no stone unturned to find potential”

“We need to put up our best face of the Indian U-17 World Cup Squad in the FIFA World Cup next year and through Scouting we can ensure that”, Yadav informed.

The third phase of the Scouting through the U-16 Youth League will commence at the Jawaharlal Nehru Stadium in Fatorda, Goa next on November 25 and 26, 2016.