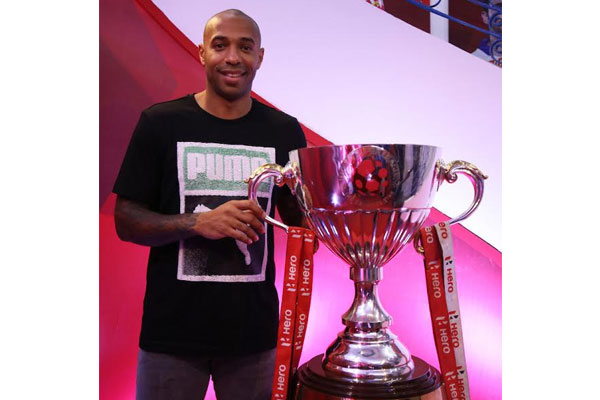 India Blooms News Service | | 26 Oct 2016, 07:33 pm
#Thierry Henry, #ISL, #Arsenal
Mumbai, Oct 26 (IBNS): Arsenal legend Thierry Henry is no alien to the Hero Indian Super League and believes the three-month league which attracts some big names from across the world can help massively in the development of Indian football.

The former Arsenal striker and now assistant coach of the Belgian national team is currently on a two-day visit to India but needs no introduction to the ISL. He was among the early marquee names discussed to take part in the inaugural edition of the ISL in 2014, but while he could not make it to India, his former teammates – Robert Pires and Freddie Ljungberg – were the marquee players for FC Goa and Mumbai City FC respectively.

Since the start of the ISL in 2014, several leading names from world football have plied their trade in India and Henry believes the arrival of stars from around the world can give a fillip to Indian football.

“It helps massively when you have such people in the league,” said Henry. The ISL since its inception in 2014 has attracted top names like Zico, Roberto Carlos, Lucio, Robert Pires, Freddie Ljungberg, David Trezeguet, Alessandro Del Piero, Elano Blumer, Helder Postiga, Adrian Mutu and Nicolas Anelka to name a few.

The Arsenal legend who also played for Monaco, Juventus, Barcelona and New York Red Bulls, however, asked the organizers to ensure that more young Indian players come through the ranks and get a chance to rub shoulders with the best.

“What helps more is if you can develop young Indian players who can play alongside these footballing greats and learn about the game. That’s what will be amazing,” said Arsenal and France’s leading goal-scorer.

Henry landed in Kolkata on Tuesday morning and within hours was witnessing the ISL clash between Atletico de Kolkata and Mumbai City FC, a close encounter that left him impressed.

“I arrived into India and came to see the ISL match in the evening. The game needed a goal, which came late, but other than that it’s a good atmosphere here. It was a good game of football. We saw two good goalkeepers and Diego Forlan doing what he does best – putting the ball at the back of the net,” said Henry.