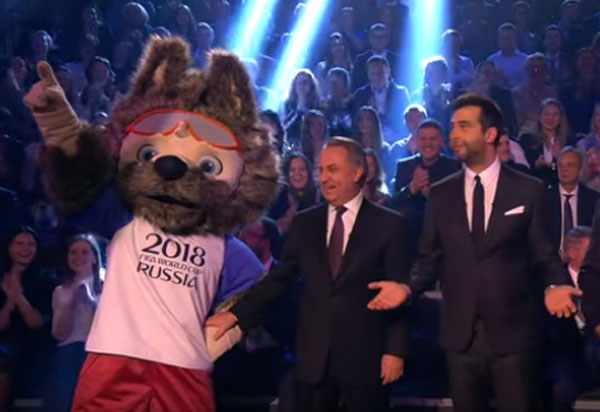 India Blooms News Service | | 22 Oct 2016, 12:26 pm
# Zabivaka, #Russia, #Mascot
Zurich, Oct 22 (IBNS): A wolf who radiates fun, charm and confidence has been chosen by the Russian public as the Official Mascot for the 2018 FIFA World Cup Russia, an official release stated on Friday.

Named Zabivaka, which suitably hints at “the one who scores” in Russian, the wolf developed by student designer Ekaterina Bocharova received 53 per cent of the votes, followed by the tiger (27 per cent) and the cat (20 per cent).

"More than one million votes were cast on FIFA.com and through a live show on Russia’s Channel 1 during the month-long voting period, concluding the most engaging creative process for an Official Mascot in FIFA World Cup history," the release said.

“To get to the stage of seeing the wolf chosen today, we first collected the preferences of Russian kids through an online poll. Based on those ideas, university students submitted their designs and now the public have chosen their favourite character from among the final three,” said FIFA Secretary General Fatma Samoura.

“Eighteen months after kicking-off this project, we are extremely happy that the 2018 mascot is the result of a team effort where the Russian people demonstrated their creative flair and their strong commitment to putting on a successful FIFA World Cup,” she said.

“I am sure Zabivaka will be a massive hit among fans at the FIFA Confederations Cup 2017 and the 2018 FIFA World Cup Russia,” added the Local Organising Committee Chairman Vitaly Mutko, who attended the live TV show that crowned the wolf.

“However, his role goes far beyond simply being popular among spectators. Our Mascot is tasked with inspiring supporters, getting the wider population involved in football and inviting them to the stadiums in order to experience memorable and positive emotions. Millions of Russian football fans took part in the vote and this means Zabivaka will do a worthy job representing our country around the world,” Mutko added.

Appearing alongside the three contenders on the Channel 1 show was Brazilian football legend and two-time FIFA World Cup winner Ronaldo.

The evening brought back fond memories for him, as it was he who introduced the 2014 FIFA World Cup official mascot four years ago on Brazilian TV.

“Fuleco was a great success in Brazil, my kids loved him. And the grown-ups too. It is incredible how time flies and here we are introducing the mascot for 2018,” said the former player who scored 15 times in FIFA World Cup matches.

“Mascots are great ambassadors for promoting the event and bring so much joy to the stadiums. I can see it happening already in Russia with Zabivaka just by seeing him on stage tonight. He will surely be remembered for a very long time by football fans all over the world,” he said.

He might be the youngest player in the squad, but you won’t find anyone faster, bolder or more skillful with a football.

He is charming, confident and social and has always dreamt of becoming a football star.

He is a fair player, values his team members and respects his opponents, and he plays with skill and purpose.

He is always fun to be around – as the joker in the pack, he knows how to make others laugh.

He has taken to wearing cool sports glasses when he’s in action; he believes they give him special targeting powers on the pitch.

And he loves to pose for photos