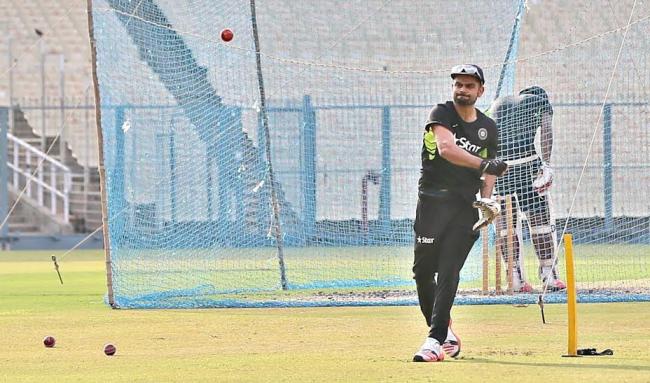 Ind-NZ: Kiwi's pick up 4 wickets in the last session to even honours

India Blooms News Service | | 30 Sep 2016, 05:00 pm
#India, #New Zealand, #Virat Kohli, #Eden Gardens, #India Test, #Second Test
Kolkata, Sept 30 (IBNS): After a barren second session for the New Zealand team, the Kiwi bowlers made a strong comeback in the match by picking up 4 wickets in the ensuing session to even honours with India here on Friday, day one of the second Test match.

At the end of day's play, which ended four overs short of a full day's play, India have put on 239 runs for the loss of seven wickets.

Resuming with their unbeatn 90-run partnership, Cheteshwar Pujara and Ajinkya Rahane added another 51 runs before the former was dismissed for 87, with birthday boy Martin Guptill taking a sharp catch at covers off Neil Wagner.

Ajinkya Rahane, who went to tea with an unbeaten score of 47, completed yet another half-century, but failed to convert it to a hundred, getting out for 77 off a Jeetan Patel delivery.

Patel, who made his comeback in white clothing after a long gap, also picked up the wicket of Rohit Sharma (2).

From 187 for 3 to 200 for 6, India suffered a slump before Ravichandran Ashwin and Wriddhiman Saha put up a 31-run stand.

Ashwin (26) was the last man to fall on the inaugural day, as Henry struck again to finish the day with three scalps.

He had earlier accounted for the Indian opening pair of Shikahar Dhawan (1) and Murali Vijay (9).

After winning the toss and electing to bat first, the home side got off to a rocky start as Dhawan departed early in the second over.

A small partnership of 27 runs ensued between Vijay and Pujara, before the former was sent back with a peach of a delivery.

India's flamboyant skipper Virat Kohli, who off late is having trouble scoring big runs post his innings of 200 runs in the Caribbean, failed to get going as he slashed one from Boult only to have Tom Latham complete a smart catch and end his innings prematurely.

Following a shaky initiation, Pujara and Rahane stemmed the rot with a 141-run partnership, also ensuring a dent-free period of play for India in the second session by keeping the Kiwi bowlers at bay while keeping the score board ticking.

India will resume batting tomorrow, with Saha (14) and Jadeja (0) at the crease.

This is the home side's 250th Test match in India and 501st overall.