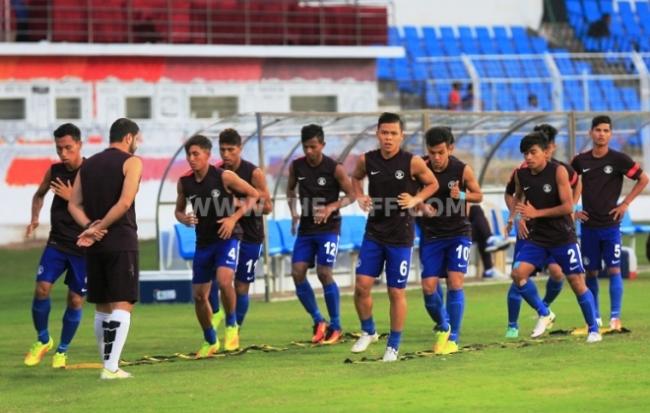 India Blooms News Service | | 20 Sep 2016, 04:01 pm
#Colm Toal, #AFC, #Iran, #India
New Delhi, Sept 20 (IBNS): The situation is so similar to 2012. India then coached by Colm Toal and playing in the AFC U-16 Finals in Tehran had to then win their last Group League match against China to keep alive their chances to make it to the quarterfinals, a match which eventually ended 2-2.

A day prior to India’s last Group A League match against a “quality” Iran it’s exactly the same. India need a win to keep alive their chances of making to the quarterfinals. However, present India U-17 World Cup Coach Nicolai Adam isn’t much willing to go into calculations.


“I think none of the boys are at all calculating. Personally I don’t even like to calculate. It’s not at all interesting for me,” he tells www.the-aiff.com at the Team Hotel. “Right now the focus is to recollect our energy and when we go to the pitch at 7pm tomorrow (September 21, 2016), we would be focussing on getting three points. After that, we will see,” he adds.

The easiest equation that one can hope for is an Indian victory against Iran and hope that UAE get at least a point from Saudi Arabia (to be played simultaneously at Bambolim Stadium).

“It will be super difficult. They have a lot of quality in their side,” he asserts, only to repeat, “…a lot of quality. Jersey nos 17 (Mohammad Ghaderi) and No. 21 (Allahyar Sayyad) have impressed me so much,” he informs. “We had met Iran last year in Tabriz in the AFC U-16 Qualifiers and they had beaten us 3-0,” he recollects.

“Going into the match we are definitely not the favourites just like we were never the favourites in the Group. But yeah, like any other Team we play to win every match and no Team is unbeatable,” he states.

“But one thing is certain -- Iran will have the same respect for us as we have for them and they won’t take us lightly. We had set the target for the semis as you always have to aim for the Sun to reach a mountain top. Everything is possible,” he feels.

“You need to remember that we are preparing for the U-17 World Cup and honestly we can’t be in a better situation than this. The fact that we are in with a chance going into our last Group League match is an achievement in itself,” he opined. “This is competitive youth Football at its best.”

Though the Indian boys have won all hearts, the slump in momentum in the second half in consecutive matches has stayed the talking point among all. Nicolai nevertheless stresses “not everything can be explained in Football.”

“I mean it,” Nicolai says. “We released uncontrolled steam in our first match and that may have had an effect in our second match. But how do you explain that the boys were running all over after conceding two in two minutes after 83 minutes and even equalised against Saudi Arabia? Where did it come from,” he queries. “You cannot explain everything in Football.”

“Fitness has never been my concern. Actually Football is played between the left and right ear – it’s a mental game and all about mental strength.”

The Coach also urged the “Football loving” fans of Goa to cheer from the stands.

“Talk to your employer and get a permission of maybe coming in an hour late to Office on Thursday. The boys deserve the numbers in the stands. I promise we won’t be easy to beat. We will give our best,” stays his message to the fans.

The kick-off against Iran on Sept 21 is at 7pm.