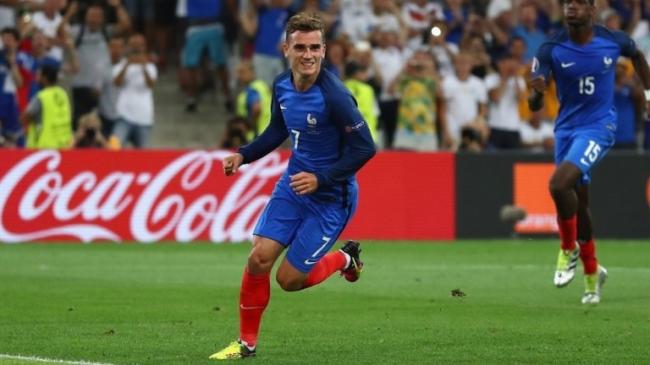 France had scored five times in their quarter-final with Iceland and started brilliantly here, Griezmann combining well with Blaise Matuidi; Manuel Neuer was down sharply to push away.

Germany, however, stood firm amid a vibrant Marseille night and began to monopolise possession, Thomas Müller steering a shot just wide before Emre Can brought Hugo Lloris into action.

Joachim Löw's side enjoyed 64% possession in the first half – but with the last kick of it, they fell behind. Bastian Schweinsteiger blocked Patrice Evra's header with his hand and Griezmann – who missed a penalty in the UEFA Champions League final – made no mistake, sending Neuer the wrong way from the spot.

While France started the second period on the front foot, they were swiftly and steadily pushed back as Germany sought a reply. However, the France rearguard held its discipline and refused to allow clear opportunities, while Didier Deschamps' team threatened on the break themselves.

Just as Germany looked to be working up a head of steam, France struck again. Paul Pogba retrieved possession down the left and Neuer, under pressure, could only palm away his cross; Griezmann prodded in the loose ball.

Germany responded strongly, Joshua Kimmich rattling the outside of the post, while the French goal had several fortuitous escapes in the closing stages, but the home crowd and the players they had cheered throughout cared little as the celebrations began.