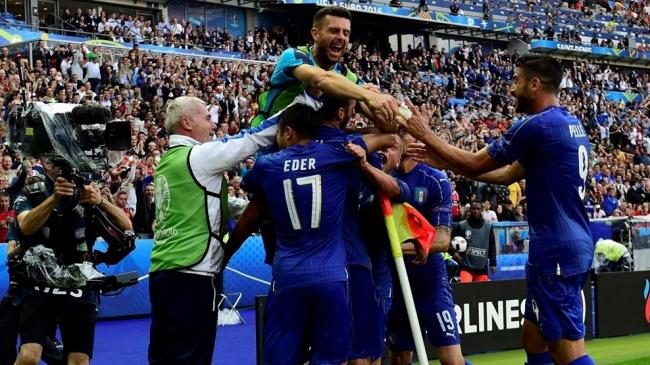 India Blooms News Service | | 28 Jun 2016, 10:20 am
#UEFA, #Italy, #Euro Cup
Saint-Denis,June 28 (IBNS) Italy brought to an emphatic end Spain's eight-year reign as European champions and avenged their 4-0 defeat in the final four years ago, as goals by Giorgio Chiellini and Graziano PellÃ¨ earned them a UEFA EURO 2016 quarter-final meeting with Germany on Saturday.

In doing so, Antonio Conte's team sounded a warning: they will take some stopping on this evidence. But for Spain goalkeeper David de Gea, this could have been a rout, Kyiv in reverse.

As it was, Chiellini's bundled finish opened the scoring on 33 minutes. De Gea kept out Éder's free-kick but Emanuele Giaccherini's immediate follow-up enabled the centre-back to tap in.

Italy had dominated from the off. De Gea was at his agile best to repel Pellè's early header and again to turn Giaccherini's overhead kick on to a post, although a foul had been given.

Spain mixed things up after the break as Andrés Iniesta grew in influence. They were not going to surrender their crown easily, Álvaro Morata, Ramos and Iniesta, with a stinging volley, all testing Gianluigi Buffon. The veteran Italian goalkeeper was also called on to expertly tip away a late Gerard Pique effort.

But Italy always looked capable of adding to their lead and, a minute into added time, Pelle finished off a fluid Italy counterattack involving Lorenzo Insigne and Matteo Darmian.

So the European champions have been deposed. Next up for Italy, the world champions.