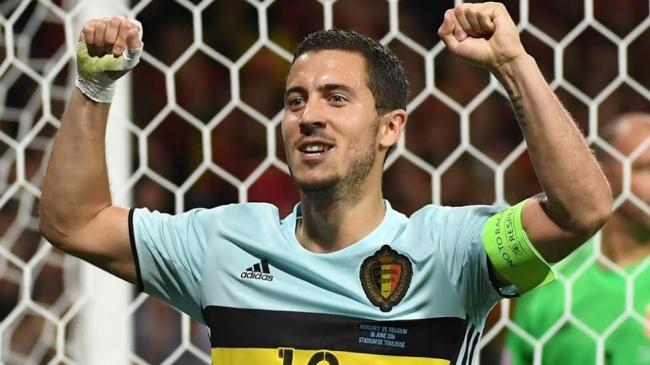 Hungary had a pre-match blow when László Kleinheisler was injured in the warm-up and Ádám Pintér was pressed into action. As if suitably emboldened, Belgium started just as Wales did in beating Russia 3-0 in the last Toulouse group game, tearing into Hungary and taking the lead when Alderweireld rose to head in a Kevin De Bruyne free-kick. Gábor Király did brilliantly to tip another De Bruyne set piece onto the crossbar; the Manchester City man, Eden Hazard and Dries Martens – preferred to Yannick Carrasco – were buzzing about behind Romelu Lukaku, swapping positions at will and launching attacks with the aid of Axel Witsel and Radja Nainggolan. Király made seven first-half saves and his eighth was seconds after half-time to deny Hazard, and although Hungary then had a promising spell, Belgium were soon back in control. Indeed, two minutes after his introduction, Michy Batshuayi marked his first finals appearance by tapping in a Hazard pass with his maiden touch. Two minutes later Hazard's shot made it three, capping a display in which the captain had given full rein to his talents. Carrasco, also off the bench, then claimed the fourth at the death. Man of the match: Eden Hazard (Belgium) Credit: UEFA.com