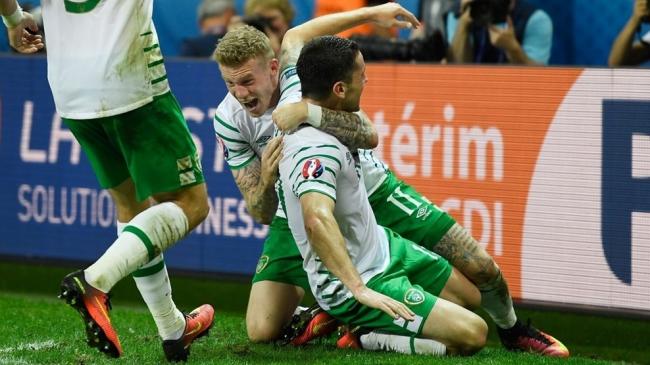 India Blooms News Service | | 23 Jun 2016, 08:24 am
#Euro Cup, #Irleand
Lille MÃ©tropole , June 23 (IBNS) On a day of high drama at UEFA EURO 2016, Robbie Brady's 85th-minute goal gave the Republic of Ireland the victory against Italy they needed to qualify from Group E and set up a last-16 match with France.

It was no less than Martin O'Neill's men deserved for a performance full of drive, ambition and no little skill. They put in a relentless effort against an Italy side that were already qualified as group winners – it was only Ireland's second competitive win against the Azzurri after their famous triumph at the 1994 FIFA World Cup.

Ireland had been quick out of the traps, with Jeff Hendrick soon shimmying into a nice shooting position 25 metres out but his left-footed drive just missed the top corner. Salvatore Sirigu was rooted to the spot, but Gianluigi Buffon's replacement then did well to tip over Daryl Murphy's powerful header.

Ireland's intensity and work-rate was giving Antonio Conte's much-changed line-up a headache and it was only when Ciro Immobile let fly two minutes before the break that Italy first showed the threat they possessed.

Ireland had a penalty appeal turned down before Italy came again, Simone Zaza volleying narrowly over. The white and green shirts kept coming but it was a blue one that went closest next, substitute Lorenzo Insigne curling a shot off the post.

Then, with seven minutes left, came the chance Ireland thought may be their last as Wes Hoolahan fired straight at Sirigu with the goal at his mercy.

Just over 60 seconds later, though, it was Hoolahan's pinpoint cross that met a marauding Brady's head to send the vast bank of Ireland fans into raptures.

Man of the Match: Robbie Brady