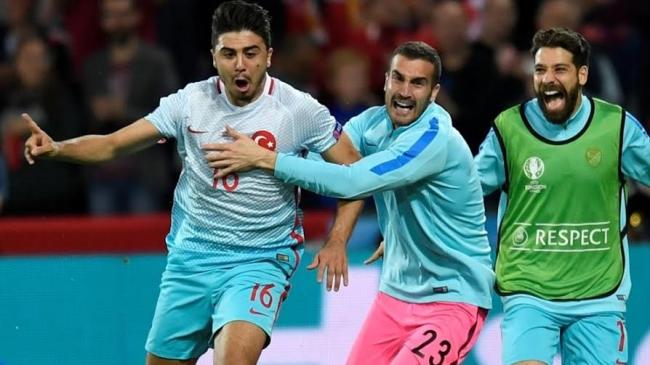 India Blooms News Service | | 22 Jun 2016, 01:31 pm
#Euro Cup, #UEFA, #Turkey, #Czech Republic
Lens Agglo, Jun 22 (IBNS): Turkey evoked their dramatic comebacks of UEFA EURO 2008 to beat the Czech Republic 2-0 at the Stade Bollaert-Delelis and give themselves the chance of a last-16 spot as one of the four best third-placed teams here in France.

Burak YÄ±lmaz and Ozan Tufan scored each side of half-time as Fatih Terim's men overhauled a Czech outfit chasing a win themselves to secure their own qualification for the knockout stage. Instead the team in turquoise eliminated them, just as they had eight years ago in Geneva. Turkey's first goal at these finals was easy on the eye, if not the ears given the majority pro-Turkish crowd. Arda Turan released Emre Mor down the right and his cross was perfect for Burak to smash first time past Petr ÄŒech. It was Burak's eighth goal in his last 11 internationals. Tomáš Sivok, one of three Turkey-based players in the Czech side alongside Tomáš Necid and David Pavelka, nearly produced a quick equaliser with a header against the post. And despite Turkey always looking dangerous on the counter, the lost opportunities piled up at the other end: Pavel KadeÅ™ábek shooting at Volkan Babacan, Necid prodding over and Jaroslav Plašil seeing a long-range strike tipped over. Neither team was close to qualification at the halfway stage in Lens. Emre might have made things clearer but fired over after an exciting diagonal surge while Vladimír Darida and Necid gave Volkan more work to do. Crucially, however, Ozan Tufan brought a bit more definition to the qualifying picture on 65 minutes when he blasted home after Mehmet Topal had nudged Selçuk Ä°nan's free-kick back towards him. The next 24 hours will determine whether his strike was enough. Man of the match: Burak YÄ±lmaz (Turkey) Credit: UEFA.com