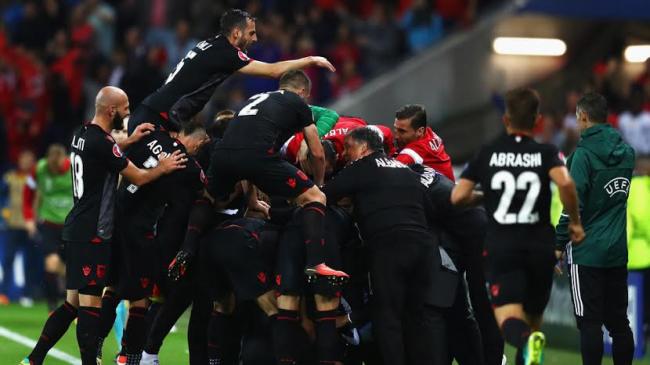 India Blooms News Service | | 20 Jun 2016, 11:15 am
#UEFA Euro, #Albania, #Romania, #Arlind Ajeti, #
Lyon, Jun 20 (IBNS): Debutants Albania must wait to learn if they will progress to the UEFA EURO 2016 knockout phase after leapfrogging Group A rivals Romania into third with a historic 1-0 victory â€“ their first at a major finals.

Both sides realistically needed a win in Lyon to keep their chances alive, and it was Romania who began with the greater urgency as they chased a potential runners-up spot. Albania, meanwhile, could only hope for a last-16 berth as one of the four best third-placed teams, but that prospect looked slim as Romania let fly with a series of attempts from distance. Bogdan Stancu did better, meeting a dropping ball with a superb volley, and although Etrit Berisha was equal to it, the Albania No1's team-mates appeared decidedly nervy in front of him. That was all about to change. And, curiously enough, it was an offside opportunity that switched the momentum, Ermir Lenjani having his blushes spared by a raised flag after blazing over from right in front of goal. Having come so close, Albania's players immediately grew in confidence and their opponents struggled to adapt. It was no great shock, then, when Armando Sadiku headed in their first-ever major tournament goal close to half-time, connecting with Ledian Memushaj's cross as goalkeeper Ciprian TÄƒtÄƒruÅŸanu came out to claim. The emotional celebrations told their own story, but Albania still had a job to do after the break. Save for a scare when substitute Florin Andone fired against the crossbar, they did it – and the best may be yet to come. Man of the match: Arlind Ajeti (Albania)