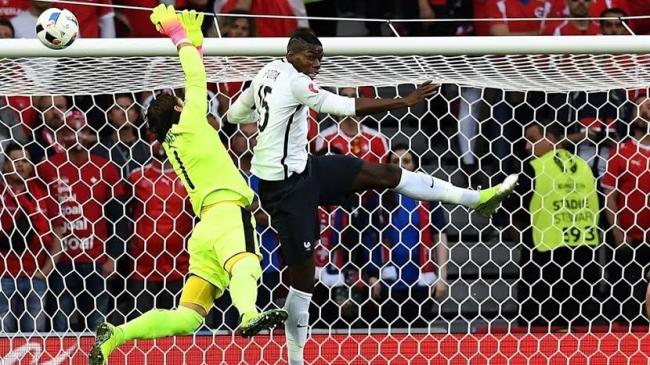 Stalemate takes Swiss through with France

India Blooms News Service | | 20 Jun 2016, 11:13 am
#UEFA Euro, #France, #Switzerland, #Paul Pogba, #Yann Sommer
Lille MÃ©tropole, Jun 20 (IBNS): Hosts France and Switzerland both reached the round of 16 as a goalless draw in Lille assured them of first and second place respectively in UEFA EURO 2016 Group A.

France had needed late goals to beat both Romania and Albania and nearly gave themselves an early deficit to retrieve as Fabian Schär's flick from a corner was almost touched in by Paul Pogba at the far post. Pogba was quickly involved at the other end, firing in a shot from distance that nearly caught out Yann Sommer; only the top of the crossbar spared the goalkeeper's blushes after he had fumbled. Seconds later, the Switzerland No1 sprang to his left to tip a fierce, angled Pogba drive behind, but he was helpless again in the 17th minute as the Juventus midfielder surged forward and thumped in a 25-metre effort that again struck the woodwork. The next clear chance took until the 57th minute to arrive, Antoine Griezmann brilliantly exchanging passes with André-Pierre Gignac before letting fly a shot that Sommer palmed behind. With the pace of the game dropping, a draw seemed on the cards, but no one had told Moussa Sissoko. The midfielder broke through three challenges on the right and delivered a deep cross that found Dimitri Payet in space, the substitute smacking a volley off the bar. Switzerland held out, however, ensuring the celebrations at the end would be shared. Man of the match: Yann Sommer (Switzerland)