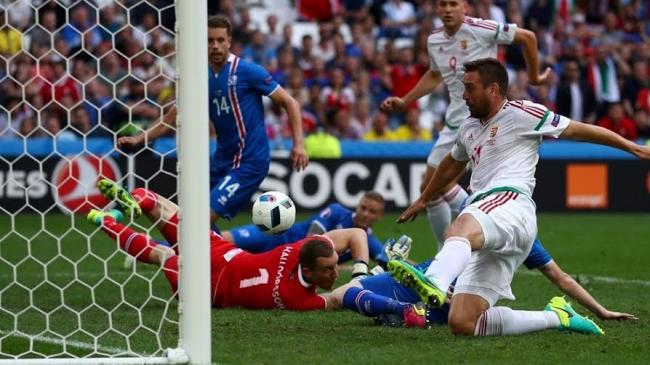 In desperately lunging to cut out substitute Nemanja NikoliÄ‡'s low delivery across the six-metre box, the right-back turned the ball past Hannes Halldórsson. It cancelled out a 40th-minute advantage given them by Gylfi Sigurdsson's spot kick. However, they might still have won it in Marseille, substitute Eidur Gudjohnsen having a shot deflected wide at the death. After an uncertain first half-hour, Iceland warmed to the task, threatening when Johann Gudmundsson was denied by the outstretched right leg of Gábor Király after outmuscling Tamás Kádár in the area. It was an error from the much-talked-about veteran keeper, though, that led to the opener. The 40-year-old Király failed to gather Gudmundsson's corner and in the ensuing scramble for possession, Kádár brought down captain Aron Gunnarsson. Sigurdsson kept his cool from the spot. Hungary's second-half advances were unrelenting, although like the first period Lars Lagerbäck and Heimir Hallgrímsson's men fashioned the better openings. Kolbeinn Sigthórsson headed wide Sigurdsson's left-wing cross on a rare counterattack, and after the scores were levelled, a last-gasp free-kick on the edge of the Hungary box prompted a late burst of drama. Gudjohnsen's low drive was diverted off target after Sigurdsson's attempt bounced back off the wall. Man of the match: Kolbeinn Sigthórsson (Iceland) Credit: UEFA.com