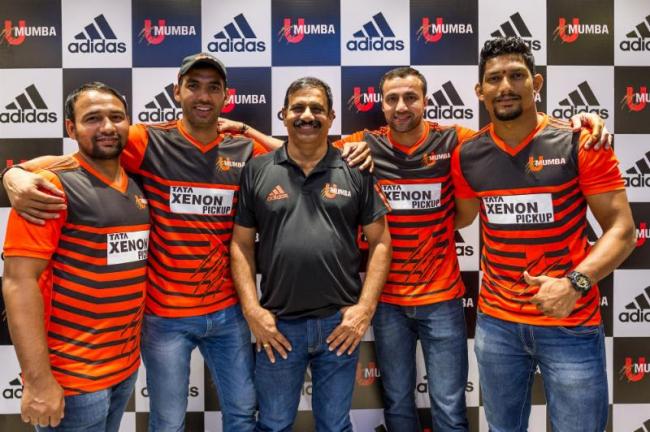 UMumba jersey gets a new look for season 4

India Blooms News Service | | 18 Jun 2016, 06:25 pm
#UMumba jersey, #UMumba
Mumbai, June 18 (IBNS): Adidas, the leaders in innovation, will team up with Season 3 finalists, UMumba and continue their association for the upcoming season of Star Sports Pro Kabaddi, which begins on June 25 with UMumba facing Jaipur Pink Panthers in their opening game in Pune.

Modelled on the Season 3 kit from adidas, the new jersey is made from materials which are specifically designed to offer ultimate comfort on the field, aiding in the control of body temperature and moisture.

The jerseys will feature the patented adidas CLIMALITE technology which is embedded into the fabric's pores to absorb sweat and keep the player dry at all times.

Damyant Singh, Senior Marketing Director, adidas India, said, "We remain relentless in our endeavour of being the world's best sports brand. At adidas, we innovate and create products that enable athletes to perform at their best. The kit incorporates an inspiring design in the team colours and is modelled on construction patterns used in Rugby. We have worked closely with the athletes in fine-tuning the product and look forward to seeing the team dominating the league in the 3-Stripes."

UMumba pride themselves on selecting a balanced and strong seven that put up consistent performances through all three seasons but come Season 4, the team would be put to test as new faces will look to make their mark.
Supratik Sen, CEO, U Sports, firmly believes that a changed line-up will only bring better results for UMumba. "The New Team is an ideal mix of experience and youth. Our pillars are intact and will guide the new players to excel. In continuing our association with adidas as Performance Partner, we believe that this new look UMumba aligns with the beliefs of adidas - going beyond the reach and growing the sport. We believe in grooming young talent and our selections during the auctions will bear fruit when the players take the mat come 25th June," concluded Sen at the UMumba jersey launch.

Season 4 preparations for the Mumbai franchise kicked off with a thrilling auction that saw new blood join the team with Captain Anup Kumar and the tournament's best raider Rishank Devadiga being retained. Rakesh Kumar and Jeeva Kumar were bought back by the franchise to bolster the experience quotient with Surender Singh, Vikas Kale, Gurvinder Singh and Sunil amongst the new entrants to the team along with two of the best SSCB players - Surjeet and Vikash Kumar to make a super well balanced team that aims to win. While the makeup of the team certainly appears different, it will be a test of character for the highly successful outfit that has reached the finals in all three Star Sports Pro Kabaddi editions so far, clinching the title on home turf in Season 2.