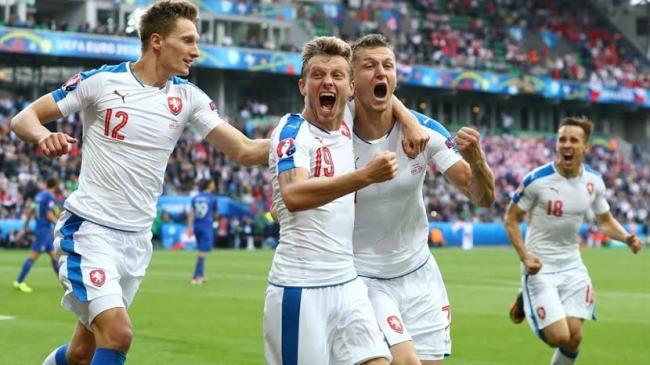 Tomáš Necid came off the bench to score a dramatic late penalty and salvage a 2-2 Group D draw for Czech Republic in Saint-Etienne, which denied Croatia an early spot in the last 16 at UEFA EURO 2016. With an emotional Darijo Srna back wearing the captain's armband five days after the death of his father, Croatia established a swift control on the contest that looked set to hand them a comfortable win. As Luka ModriÄ‡ prompted from deep and Ivan RakitiÄ‡ added zip further forward, a knockout place alongside France and Italy seemed to open up for Ante ÄŒaÄiÄ‡'s men when Ivan PerišiÄ‡ struck on 37 minutes. Having already slid in unsuccessfully to cap a dazzling counterattack, the Internazionale midfielder bamboozled Tomáš Sivok with quick footwork and drilled the ball inside the far post after Milan Badelj had reclaimed possession. It was no more than Croatia deserved. And they doubled their advantage with an even more elegant finish, RakitiÄ‡ clipping the ball delightfully over Petr ÄŒech after being played in by Marcelo BrozoviÄ‡. The Czechs looked destined for a second straight loss, but after ModriÄ‡ limped off with an apparent groin injury, Pavel Vrba's side found their way back thanks to a pair of substitutes. Milan Škoda headed home to make it interesting. That was followed by a brief pause in proceedings to clear away objects thrown onto the pitch. After play had resumed, another replacement – Tomáš Necid – converted a late penalty following Domagoj Vida's handball. Man of the match: Ivan RakitiÄ‡