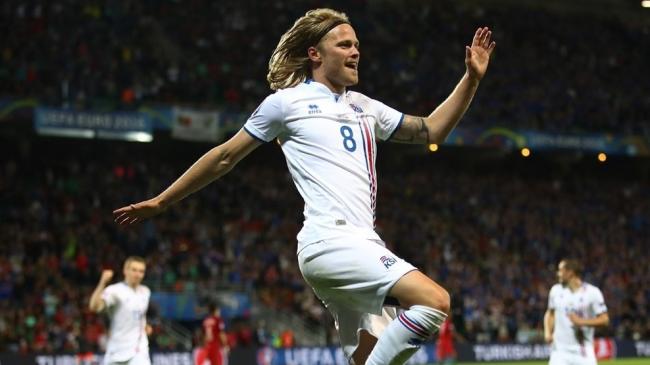 The final game of matchday one was a big occasion for both teams, but especially for Iceland, and the debutants began with a spring in their step, almost taking the lead in the third minute when Rui Patrício was forced to save from Gylfi Sigurdsson – and to repeat the feat from the rebound as Sigurdsson tried again.

Portugal's qualities on the ball soon started to tell, however, and Iceland goalkeeper Hannes Halldórsson pulled out an incredible save with his legs as Nani headed goalwards from a Cristiano Ronaldo cross.

Winning a joint-record 127th cap for Portugal, the provider on that occasion then mistimed his swing at a Pepe pass from deep, but a goal was coming – and Nani delivered it just after the half-hour, turning in at the near post following slick interplay between André Gomes and Vieirinha. It was a landmark goal, the 600th in EURO finals history.

Game over? Far from it. Given spirited backing by their fans, Iceland levelled within five minutes of the restart, an unmarked Birkir Bjarnason left free to volley in from Johann Gudmundsson's cross.

Portugal responded with the crisper passing and better chances, Nani flicking a header wide and Halldórsson denying Ronaldo, but Iceland were not about to let their efforts go unrewarded.

Man of the match: Nani