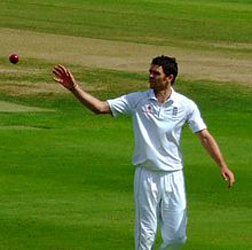 The 33-year-old was found to be in violation of Level 1 Article 2.1.1 of the ICC Code of Conduct for Players and Player Support Personnel which relates to “conduct that is contrary to the spirit of the game.”

Anderson admitted the offence and accepted the sanction proposed by Andy Pycroft of the Emirates Elite Panel of ICC Match Referees. As such, there was no need for a formal hearing.

The incident happened during Sri Lanka’s first innings when Anderson showed disrespect to S. Ravi after the umpire had reminded the fast bowler not to verbally engage with Sri Lankan batsman Rangana Herath.

The charge had been laid by the on-field umpires S.Ravi and Rod Tucker, as well as third umpire Aleem Dar and fourth umpire Michael Gough.

All Level 1 breaches carry a minimum penalty of a warning/reprimand and/or the imposition of a fine of up to 50 per cent of the applicable match fee.