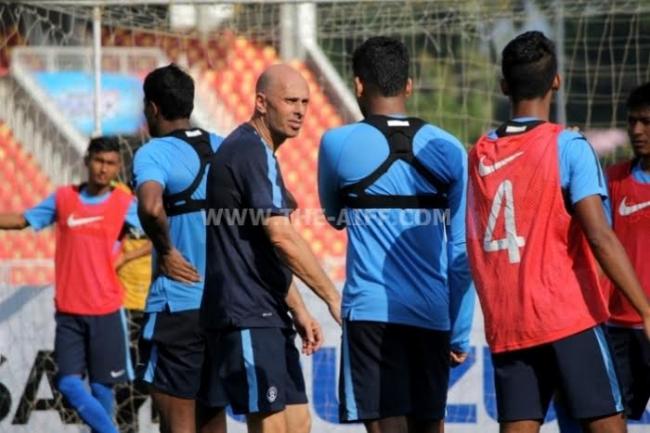 Injury-hit Indian squad to leave for match against Laos

India Blooms News Service | | 30 May 2016, 12:49 pm
#Subrata Paul, # Gurpreet Singh Sandhu, # Amrinder Singh
New Delhi, May 30 (IBNS) With midfielder Vinit Rai having suffered an ankle injury in the last training session (in Guwahati), a list of 20 Players would be departing for Laos from Delhi early Tuesday (May 31) morning for Indiaâ€™s forthcoming 2019 AFC Asian Cup Qualifier against Laos slated for June 2, 2016.

The return leg will be played in Guwahati on June 7. National Coach Stephen Constantine informed that he had to make last minute changes with “Vinit suffering an ankle injury.” “We had finalized on a list of 21 Players who were to travel to Laos but now we will be travelling with a squad of 20 Players,” he told www.the-aiff.com. Goalkeeper Gurpreet Singh Sandhu, who became the first-ever Indian Player to play in a Premier League in Europe will join the Team directly in Laos. Besides Vinit’s injury, the squad has also been hit hard by injuries to other Players, seven of whom, Constantine feels, would have started on any given day. Midfielders Rowlin Borges, Pronay Halder, Cavin Lobo, Bikash Jairu and defender Augustine Fernandes were either ruled out or released from the Camp owing to injuries. Furthermore, Dhanpal Ganesh and Striker Robin Singh haven’t recovered from the injuries they sustained earlier. Add to that the injuries of CK Vineeth and David Lalriamuana, both of whom couldn’t even kick a Ball in the Camp despite being summoned, things haven’t worked the manner Constantine would have liked it to in the Camp. "There’s no reason to cry. We have a set of Players who are ready. It’s an important match for us. The boys showed at the SAFF Championship what they were capable of,” Constantine maintained. “With not sufficient Players available to play 11v11 in the Camp, the focus was to improve the fitness levels of the Players who reported.” The squad Goalkeepers: Subrata Paul, Gurpreet Singh Sandhu, Amrinder Singh. Defenders: Rino Anto, Keegan Pereira, Pritam Kotal, Arnab Mondal, Sandesh Jhingan, Chinglensana Singh, Fulganco Cardozo, Narayan Das. Midfielders: Udanta Singh, Halicharan Narzary, Seityasen Singh, Md. Rafique, Eugenson Lyngdoh, Jackiechand Singh, Alwyn George. Forwards: Sumeet Passi, Jeje Lalpekhlua, Sunil Chhetri.