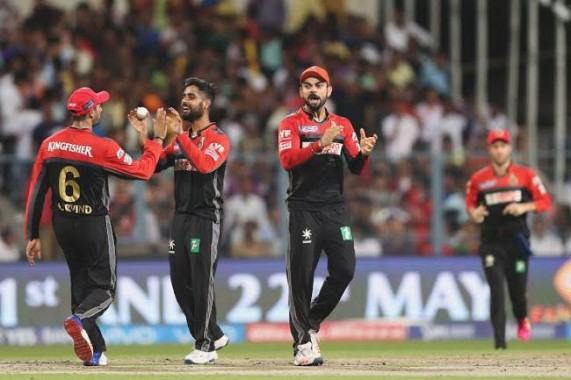 AB de Villiers, who was named the player of the match, remained unbeaten at 79 runs off 47 balls, hitting five fours and an equal number of sixes.

Playing second fiddle to the South African dasher was Abdullah, who managed 33 off 25 balls. Abdullah hit three fours and a six.

In an unusual sight for the Bangalore faithfuls, RCB skipper and top scorer in the ongoing season of IPL, Virat Kohli departed for a naught, leaving the crowds stunned. His exploits thus far consists of four centuries and six fifties. The Delhiite has amassed 919 runs at an average of 83.54, becoming the highest gun getter in a single season across all editions.

If Virat was the first to go and silence the crowd, the RCB fans were in for a rude shock as a parade ensured there after, losing the next four batsmen in a space of four overs.

In a belligerent spell of pace bowling, Gujarat medium pacer Dhawal Kulkarni, who earned a call back in the Indian squad for the Zimbabwe tour, set Chris Gayle (9) up with a fast bouncer. Though Gayle survived the initial onslaught, Kulkarni pegged back the Jamaican's stumps with a straight ball.

KL Rahul (0) played in his hands the very next ball, edging one for a simple catch to be completed at first slip.

If that wasn't enough for the men in red and black, Shane Watson (1) tried sweeping one from Jadeja and managed a faint edge. Dwayne Smith, who was brilliant with the bat, took it with great ease. Adding insult to injury was Sachin Baby, who tried hitting one over the cover, but was caught inside the circle, taking his team's score to 29 runs for the loss of five wickets.

A partnership of 39-run between AB de Villiers and Stuart Binny for the sixth wicket brought back normality in the game.

Binny departed for 21 runs. His 15-ball innings consisted of two fours and a maximum.

Earlier, Shane Watson accounted for four Gujarat batsman, earning the Purple Cap in the process. It was earlier with Yuzvendra Chahal, who managed a solitary wicket but was carted all over the park for runs.

Dwayne Smith, who scored 73 off 41 balls, was particularly brutal against Chahal. The West Indian all-rounder hit five fours and half a dozen sixes to build the innings for his side, who were reeling at a precarious position.

Virat Kohli, after winning the toss, decided to put the Lions to bat first. A masterstroke from him, where he introduced Iqbal Abdullah in the second over of the game, saw the end of both Brendon McCullum (4) and Aaron Finch (1) inside one over.

A planned set up exploited Suresh Raina's weakness against the rising ball, as Shane Watson banged one short and the Gujarat skipper obliged by hitting it straight to the short fine leg fielder.

Smith forged a 85-run partnership with Dinesh Karthik to bail his team out of trouble.

After Smith's departure, a late surge by Eklavya Dwivedi (19 off 9) and Dhawal Kulkarni (10 off 4) helped their team race past the 150-mark.

Dwivedi, who smackd Watson for consecutive sixes, departed only after Virat Kohli took a blinder in the deep.

Among the Bangalore bowlers. Watson picked up four wickets, while Abdullah and Jordan accounted for a brace each. Chahal picked up a wicket.