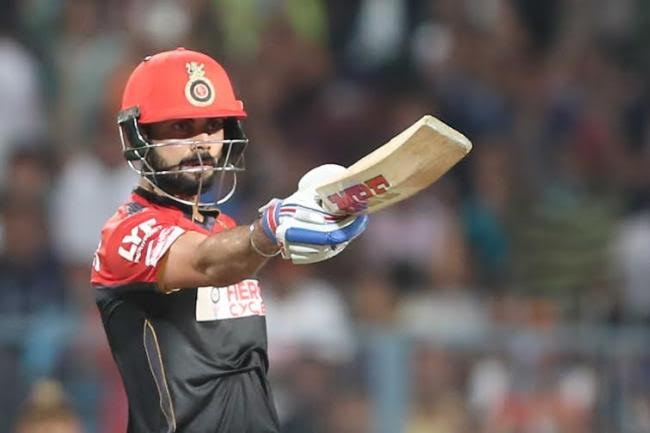 India Blooms News Service | | 22 May 2016, 11:32 pm
#Virat Kohli, # RCB, # Delhi Daredevils
Raipur, May 22 (IBNS) Chasing 139 runs for victory, Virat Kohli scored yet another half century to steer his side to a win by virtue of which the Royal Challengers Bangalore beat Delhi Daredevils by six wickets and stomped to the playoffs here on Sunday.

Virat remained unbeaten at 54 runs off 45 balls, hitting six of them for fours.

He staged a 28-run unbeaten partnership with Stuart Binny (16) to clinch the match with 11 balls to spare.

The RCB will face Gujarat Lions in the first playoff.

Put to bat first, the RCB bowlers bowled tight channels to keep the DD batsmen down to 138 runs for the loss of eight wickets.

Yuzvendra Chahal was the pick of the RCB bowlers, picking up three wickets for 32 runs. Chris Gayle also chipped in with a brace, accounting for Pawan Negi (6) and compatriot Carlos Brathwaite (1).

Delhi had yet another forgetful opening partnership. The openers managed just 11 runs, before Rishabh Pant (1) was sent back to the pavilion by Sreenath Aravind.

Though Quinton de Kock (60) scored a half century and managed to forge a couple of 30-odd partnership for the ensuing wickets, the scoring rate for his side never really shot up.

Chris Morris, who walked in at number eight, hit three boundaries in his 18-ball innings of 27, to hand his side a much needed momentum. Morris was later instrumental in getting Chris Gayle (1) out early, as the burly Jamaican dragged one onto his stumps.

Reeling at 17 runs for the loss of two wickets, Virat Kohli forged a 66-run partnership with KL Rahul to get his team back on the track.

Rahul, who scored 38 runs off 23 balls, hitting four fours and a six, was dismissed by Carlos Brathwaite, as the ball rolled back onto his stumps following a defensive shot.

Shane Watson, who walked in at number five, scored 14 runs. Watson, who retired from international cricket earlier this year, added 28 runs for the fourth wicket along with Kohli.