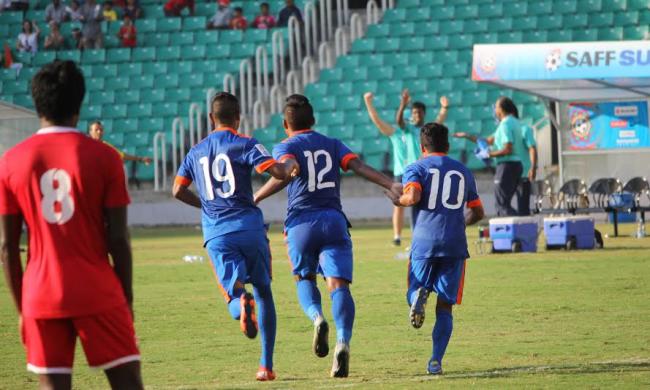 Jeje Lalpekhlua scored a brace (33rd and 65th) after Captain Sunil Chhetri had opened the scoring for India.

After both Teams entwined a battle for possession in the early minutes of the match, the ‘Men in Blue’ fostered their first chance of the match in the 9th minute when Jeje played a sweet pass to Sunil Chhetri but the latter’s shot failed to breach the Maldivian defence line.

Three minutes later Jeje Lalpekhlua slotted the ball into the back of the net following a Eugeneson Lyngdoh corner but the Referee waved it offside to cut-short the Indian joy.

In the 20th minute, Bikash Jairu was released onto goal by Sunil Chhetri but his shot sailed over.

Two minutes later, Halicharan’s flick of a corner kick which seemed to have been brewed in the training ground was unable to find Augustine’s head.

With chances coming in left and right, the ‘Men in Blue’ finally took the lead in the 24th minute when Captain Marvelous Sunil Chhetri headed in from a Halicharan cross from the right flank to make it 1-0.

Minutes later, Chhetri was awarded with an opportunity to score India’s second, but the Maldivian custodian thwarted away his shot which eventually fell to Jeje. Jeje in an attempt to make something out of the chance unleashed a shot but that the rival Goalkepeer managed to palm it away.

In the 33rd minute, Jeje latched onto a well-timed Halicharan long through ball and slotted it comfortably past the Maldivian custodian to give India a two goal lead.

Attacking with fluidity and defending with solidity seemed India’s way as the ‘Men in Blue’ pillaged the Maldivian citadel. In the 44th minute, Jeje should have made it 3-0 but failed to beat the onrushing Goalkeeper.

Much against the run of play Maldives pulled one back in dying minutes of the first half as India headed into the interval with a 2-1 lead.

Changing over, the Indian contingent got right into the thick of action as in the 47th minute Eugeneson Lyngdoh lined a shot up, but it went over the bar.

Three minutes later, Halicharan’s shot hit the Maldivian defence line and looped over for a corner kick, as the Indian contingent pressed for their third goal of the match.

Maldives were busy defending and thwarting off the Indian barrage of attacks. In the 55th minute, Narayan Das’ free-kick from the 25 yards earned a top-draw save from the Maldivian custodian.

The fans present in the stadium hollered India through with constant cheering of “India, India” and vuvuzelas throughout the game.

In the 61st minute, Jeje found himself clear of the mix following a pass from the left flank, but smashed it over the bar. However, four minutes later he scored his second of the match to make it 3-1.

Maldives did pull one back in the 75th minute to make it 3-2 but despite the rivals going all out, the Indians managed to hold on.

In fact, India had around three chance in the last ten minutes but first Augistine failed to connect a Halicharan cross and then, Jeje and Lalianzuala failed to increase the margin.