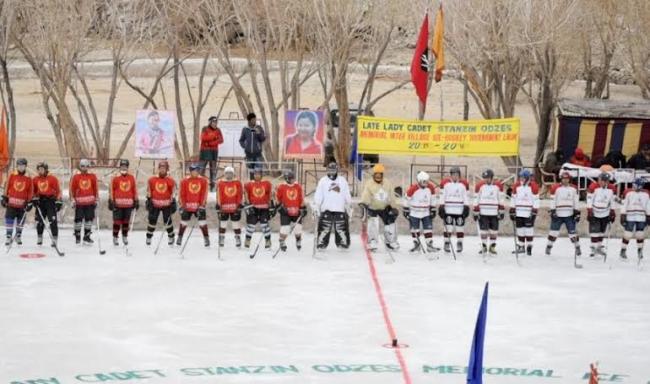 Ice hockey is a popular sport of Ladakh during winters and also captures the essence of Ladakh, especially when the water bodies freeze in the extreme cold, the local youth immerse their heart and soul into the Ice hockey rink. As part of Army's Op Sadbhavna initiative and to encourage local talent in sports, Late Lady Cadet Stanzin Odzes Memorial Inter Village Ice Hockey Tournament was organised with active involvement of the local ‘Lalok Sports Association’. The week long annual event was organised with traditional Ladakhi colours, fun and gaiety. The tournament saw the participation of nine Ice Hockey teams of the local villages/schools. The skill, speed, enthusiasm, sportsmanship and the fighting spirit of the Ladakhi players was on ample display. The sports being enormously popular, the locals in huge numbers thronged the venue to cheer for their favourite teams.