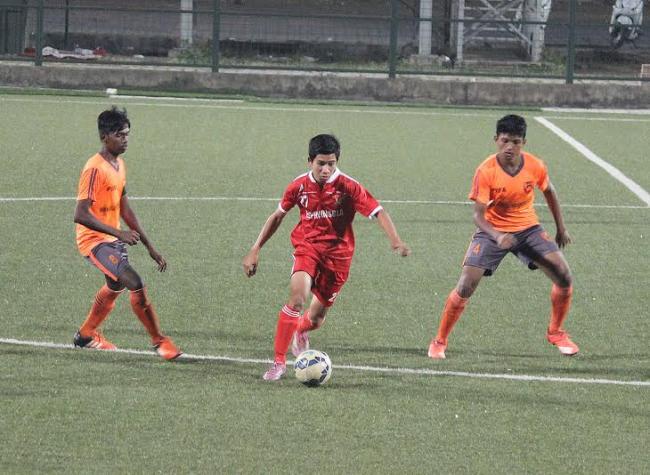 A goal in each half from striker Amey Talegaonkar (32nd minute) and substitute Gulam Ansari (88th) handed Pune FC their seventh overall win in the campaign as they completed a double over PIFA Colaba.

The three points earned in this Maharashtra Zone, Round-8 encounter also meant Pune FC maintained their top spot in the standings with 22 points, three ahead of second placed Mumbai FC.

In a game of equal exchanges, both teams played attacking football right from the word go. While Pune FC were attacking from the flanks, hosts PIFA Colaba pushed up through the middle with long balls but both sides failed to convert chances.

After soaking much of the pressure during the second quarter, Pune FC finally broke the deadlock two minutes past the half hour mark after some good work by Aakash Banerjee and Amey up front. Aakash controlled a pass down the middle and dribbled past three defenders before firing a low shot from the edge of the box. As the keeper fumbled with the collection, Amey timed his run well to slot home from close for his first goal of the campaign.

In final minutes of the first half, Pune FC had a couple of close chances through Saurabh Salape and Aakash but the duo lacked the killer finish in the final third as the half ended 1-0.

The second half was played with a similar intensity like the first, with both teams playing end-to-end football and Pune FC were first to go close as Aakash’s grounder was saved by the rival keeper after substitute Gulam, on for Amey, put him through with a wonderful aerial ball in the 51st minute.

While Pune FC kept pushing up in search of the second, hosts PIFA almost pulled level at the other end in the 62nd minute when Akash Jadhav got into the clear inside the box. However, his effort from point blank range was saved brilliantly by keeper Muhammed Shahad to keep Pune FC’s narrow lead intact.

Pune FC continued to push up in the final quarter and their efforts finally paid off as Gulam sealed the game in the 88th minute. The attacker beat the offside trap on Saurabh’s perfect through ball from the left and slotted home in a one-on-one situation for his second in as many games.