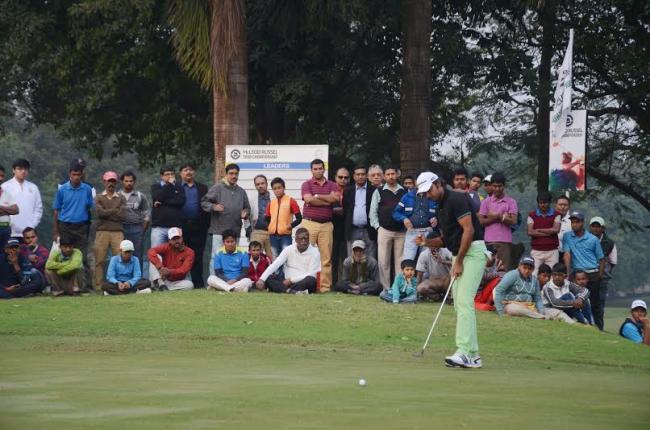 The Gurgaon-based Indian golfing legend thus established a commanding four-stroke lead at 11-under-133 at the Rs. 1.5 crore season-ending event of the PGTI being played at the Royal Calcutta Golf Club (RCGC).

The Bengaluru duo of Khalin Joshi and Chikkarangappa S were next best on the leaderboard at seven-under-137.

Jyoti Randhawa (68-65) soared to the top thanks to the tournament’s best round so far which featured an impressive two eagles, four birdies and a bogey. The 43-year-old Randhawa, the joint overnight leader along with four others, came out all guns blazing on Friday as he made two chip-ins in quick succession on the second and fourth, the first for a birdie and the second for eagle.

Jyoti, a winner of nine international titles, made his only error on a windy day on the 10th where he overshot the green with his approach and as a result dropped a bogey. He then collected his second eagle of the day on the 15th and three more birdies on the last seven holes to end up with a seven-under. He landed his second shot within six feet for eagle on the par-5 15th before signing off with a 12-feet birdie conversion on the 18th.

Randhawa, who won his last title in March 2012, said, “I sorted out some errors in my hitting today and was swinging it well. I capitalized on both the par-5s with eagles. I felt I played the stretch from the 15th to 18th really well. It was a very satisfying round.

“The wind worked to my advantage as I’m used to playing in such conditions, having played in Europe for seven years. My experience helped me negotiate the weather conditions. I’m now looking at repeating this effort over the last two days. I’ll look to keep the intensity going,” added Jyoti, who has had two top-10s on the Asian Tour this year.

Khalin Joshi (70-67), a winner on the PGTI this year, sought to put behind the disappointment of recently missing out on his Asian Tour exemption by two spots, with a solid 67 that included seven birdies and two bogeys.

“I haven’t been striking it well but my putter was hot today. I made three long birdie putts from 15 to 20 feet. I still feel I need to hit it closer to stay in the hunt this week. The back-nine offers more scoring opportunities and I made it count today. Jyoti will be the man to catch since he’s playing really well,” said Joshi, who climbed four places form his overnight tied sixth.

Chikkarangappa (68-69), the overnight joint leader, mixed five birdies with two bogeys for his 69 to drop to joint second. Chikka, placed second in the Rolex Ranking, however, is still on course for the Rolex Player of the Year title as the leader Mukesh Kumar (73) of Mhow lies a distant tied 20th at one-under-143.

Kolkata’s Rahil Gangjee, who was part of the five-way lead in round one, slipped to tied fourth at six-under-138 after his second round of 70. Om Prakash Chouhan (68) of Mhow shared fourth place with Gangjee.

Defending champion Shankar Das of Kolkata was bunched together with the Noida duo of Gaurav Pratap Singh and Amardip Sinh Malik in tied sixth at five-under-139.

The Kolkata duo of former champion SSP Chawrasia (72) and Divyanshu Bajaj (70) were in joint 14th along with four others at two-under-142.