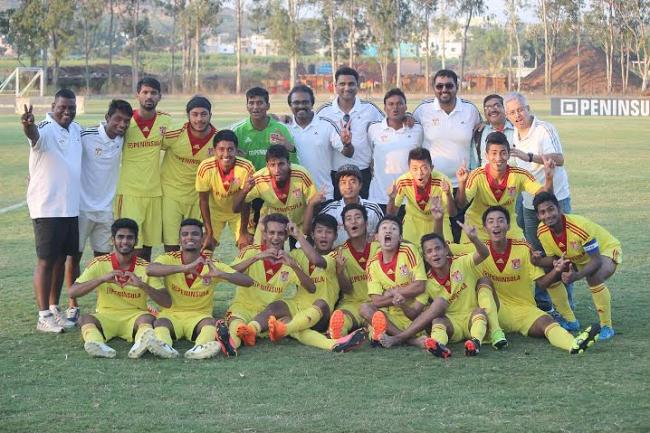 Going into the last game needing all three points, an own goal from a Mumbai FC defender along with Lalawmpuia’s record 14th goal handed Pune FC a come from behind 2-1 win at Mamurdi. The scoreline meant Pune FC piped local rival DSK Shivajians for the second year-in-a-row to top the zonal phase on goal difference. In the process, Pune FC also managed to break a number of national records. Beginning with their goal tally of 37, Pune FC outscored all teams to net the most number of goals in the zonal phase since the competition’s inception, even ahead of free scoring teams in DSK Shivajians and AIFF Elite Academy (Goa zone) who came close with 34 goals this season. A considerable amount of these goals were scored by young striker Lalawmpuia. Having been promoted to the U18 squad after an impressive show for the U17s at the start of the season, Lalawmpuia surprised one and all topping the scorer’s chart smashing fourteen goals in just eight games. In fact, the youngster broke the four-year-old record held by Mumbai FC’s Jayesh Rane who had scored 13 goals, incidentally under current Pune FC Coach Naushad Moosa, in the 2011-12 edition. While Jayesh notched that tally in the entire campaign, Lalawmpuia’s feat was accomplished in the zonal phase itself. As a total 11 players contributed to 37 goals up front, the defense too put on an impressive show keeping six clean sheets and conceding just three goals as Pune FC ended the zonal phase undefeated for the first time since the new home-and-away format was introduced in 2013-14. Furthermore, as Pune FC went on a goalscoring spree this season, they also managed to cross the impressive 150-goal mark in the competition during their sixth round win over Kenkre FC. For the record, Pune FC have now scored 154 goals in 49 games in the competition over five years. While creating national records, Pune FC also managed to improve a few personal achievements. To begin with, Pune FC hit double figures for the first time hammering Mumbai FC 10-0 at Cooperage for their biggest-ever win in the competition. In the same game, both Ashique Kuruniyan and Lalawmpuia bagged hattricks for another first. Interestingly, striker Lalawmpuia (3 hattricks) became the first ever Pune FC player to net multiple hattricks in the competition and along with Ashique (1 hattrick) combined to score four hattricks this season, the same number of hattricks Pune FC had scored before this edition (two in 2014-15, one each in 2011-12 & 2012-13). Pune FC now head into in the final phase of the U18 I-League hoping to go one step better this time having finished runners up to AIFF Elite Academy in the 2014-15 season.