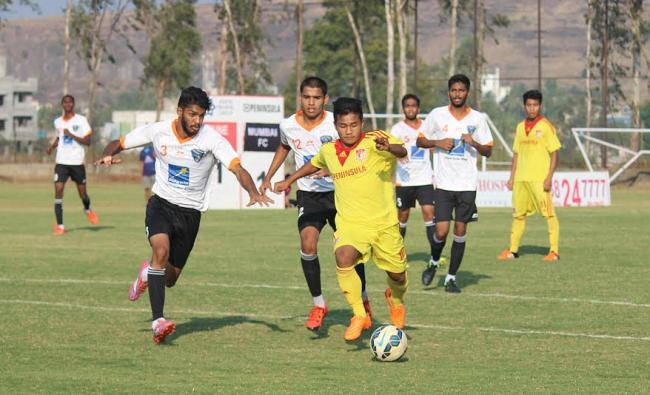 U18 I-League: Pune FC clinch Maharashtra Zone for the second consecutive season; down Mumbai FC 2-1 in a thriller

India Blooms News Service | | 21 Dec 2015, 06:51 pm
#Pune FC, # Pune, # Maharashtra
Pune, Dec 21 (IBNS) Pune FC came from a goal down to seal a thrilling 2-1 win over Mumbai FC and clinch the Maharashtra Zone of the U18 I-League for the second year in a row at the Pune FC Training Pitches in Mamurdi on Monday.

Having fallen behind to an early strike from Mumbai FC’s Asifullah Khan (13th minute, Penalty) in the final game of the zonal phase, Pune FC levelled scores after an own goal from Martin Assisi (20th) before Lalawmpuia (45+2nd) struck the winner in first half injury time.

The three points earned meant Pune FC (GD +34) finished the zonal stage unbeaten and moved to 20 points in the standings, level with DSK Shivajians (20 pts, GD +32). However, for the second year running Pune FC piped their local rivals to the Zonal title on goal difference.

With this result, Pune FC also maintained their one hundred per cent record against arch rivals Mumbai FC logging their eighth successive win in the Maha-Derby.

Having begun in attacking mode, Pune FC almost took the lead in the 4th minute when Amos sent Lalawmpuia sent clear in the box but the striker failed to capitalise hitting over from close range.

At the other end, visitors Mumbai FC took the lead against the run of play when Asifullah Khan converted a penalty kick after Pune FC defender Sebastian had fouled Ranjan Sudhakar in the box.

Having fallen behind for the first time this season, Pune FC pushed up aggressively and seven minutes later pulled level through an own goal. After winger Chesterpaul Lyngdoh was fouled outside the box on the left, Dimple Bhagat drilled in a powerful low shot into the crowded Mumbai FC box. In the melee while clearing the ball, Mumbai FC’s Martin Assisi deflected the ball into his own net to make the score 1-1.

Pune FC continued to press high up and finally took the lead in injury time when Lalawmpuia netted his 14th goal of the campaign with a brilliant finish. The striker combined with Amos for a quick one two outside the box before slotting a left-footed grounder past the rival custodian to make it 2-1 going into the breather.

The second half began in similar fashion as Pune FC went on attack mode from the word go. Early chances fell for Chesterpaul and Lalawmpuia but the duo failed to capitalise from close range.

Around the hour mark, Pune FC almost scored another when Lalawmpuia’s perfectly aimed freekick came off the cross bar with the rival custodian well beaten. The home side continued to dominate proceedings, but Mumbai FC managed to hold on defending deep in their box.

Pune FC had a few more chances through Dimple and Md. Yasir in the final ten minutes of the game but they lacked the killer finish in the final third. Nonetheless, Pune FC kept their composure to seal the 2-1 win and clinch the Maharashtra Zone once again.