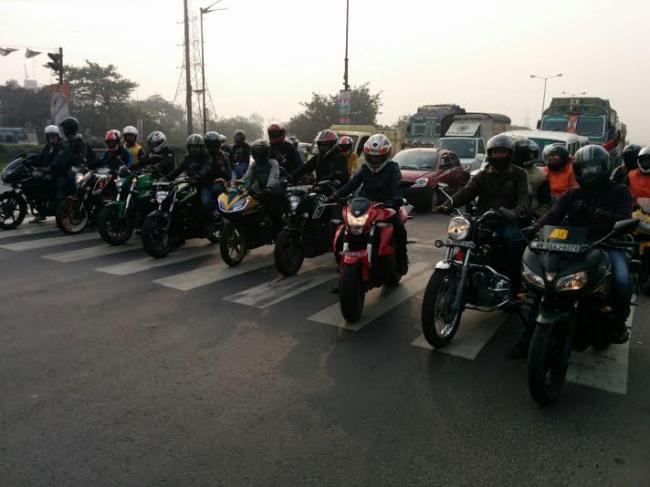 The ride marked the first IBW event in the city in line to the Festival’s 2016 social calendar.

Kolkata’s Chai & Pakoda ride featured as one of the multi city community engagement initiatives, marking the beginning of an All India biking journey leading to the monster festival that is IBW 2016 in Goa on the Feb  19 and 20, 2016.

This Sunday’s breakfast ride brought together over 300 riders from the brotherhood of biking enthusiasts – from dedicated aficionados riding heavy-duty Harleys and Triumphs, to the more casual riders on their Pulsars and Yamahas. Riders gathered at CITY CENTER 2 PARKING, RAJARHAT NEW TOWN at 5.45 AM, before setting off on the 90km ride to AZAD HIND DHABA at GOPALPUR.

This year, safety was the key theme, and the starting point featured the registered bikers inducted through a ‘safety riding’ session. Post the inauguration, the bikers took to the road in groups of 20, each led by an IBW Marshal.

The Marshals featured as pack leaders patrolling and guiding the stream of speed machines, maintaining a synchronized proximity between each riding group.

Medical support was also provided as the IBW team set up a tailing Ambulance service for the ride.

On their arrival at the stopover destination, the bikers were greeted with a breakfast buffet that has become the main feature of India Bike Week’s hundreds of Rides. At the venue, a special Rinox prize was given away to Bipin Singha, from Asansol, West Bengal, for his excellent biking spirit and enthusiasm. Due to an accident in 2007, Bipin has prosthetic legs specially designed for his Custom KTM duke 200, which is also equipped with custom gear shifts allowing him to use his heels.

Commenting on the return of the most anticipated inter-city biking rides, Martin da Costa, CEO of 70 EMG said, “We’ve always loved organizing the Chai & Pakoda Rides for our Biker brothers and sisters. It’s been fantastic response over the last four years, with this Ride especially showing the world how united India’s Biking fraternity has become. The growing support towards the C&P sessions over the years is just a brilliant testament to the evolving biking culture and spirit in India. We’ve especially enjoyed highlighting the safety issue the through the ride this year. It’s been a fantastic day, and we can’t wait for February, and the biggest India Bike Week at Goa of all time!

Swati Mohan, managing director, Fox International Channels commented that, “We have had great participation from the biking community in the past rides and coming weeks will see the C&P Breakfast Runs taking place across Hyderabad, Kochi and Bengaluru, while also featuring across Nagpur-Wardha-Amravati, Pune-Ahmednagar-Aurangabad and Surat-Baroda-Ahmedabad through tri-city rides. This year we are confident of extending our outreach to a diverse group of bikers as we look forward to building the culture for biking in India.”