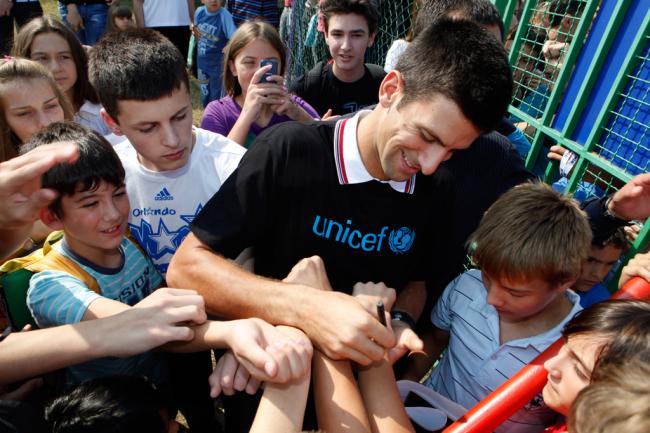 “Novak Djokovic is a true champion for children around the world. He has shown that a powerful voice and powerful actions can make a difference for children, especially when they are very young,” UNICEF Deputy Executive Director Yoka Brandt said in New York during an event that included the World Bank President, Jim Kim.

“I am honoured to have become a Goodwill Ambassador for UNICEF, and to continue to help defend and uphold children’s rights and provide access to early childhood care and development for every girl and every boy,” said the tennis champion.

Since he started teaming up with UNICEF in 2011, Novak Djokovic has been lending his support to improving the lives of children, especially those who are amongst the most marginalized, with a particular focus on the importance of early childhood education and development in providing children with the best start to life, points out a press release.

There is now a widespread recognition that children who receive care, protection and stimulation – starting well before school years, will have a much greater chance to reach their full potential. Djokovic’s commitment to children’s issues will highlight the importance of early enrichment as critical to a holistic approach to the development of young children.

Among his other many actions for children, Novak has supported the improvement of quality of preschool programmes in Serbia. The Novak Djokovic Foundation also funded UNICEF Serbia’s innovative family outreach service aimed at connecting with families living in urban areas, which was so successful it has now been integrated into the Serbian child protection system.

During the floods in the Balkans in 2014, the tennis player made donations to UNICEF to help with the emergency aid efforts. And together with apparel giant UNIQLO, one of his official sponsors, he helped support the ’Schools for Asia’ initiative in Bangladesh, China and the Philippines, as well social inclusion and poverty reduction projects in Serbia.

He also signed on Wednesday a Memorandum of Understanding between the World Bank and the Novak Djokovic Foundation, setting out how the two institutions can partner more closely to promote early childhood development.

The Fund and the Foundation have established a close cooperation on bringing early childhood services to every child and family in Serbia, and the welcome addition of the Bank’s resources will allow an even broader reach to the most deprived children around the world.