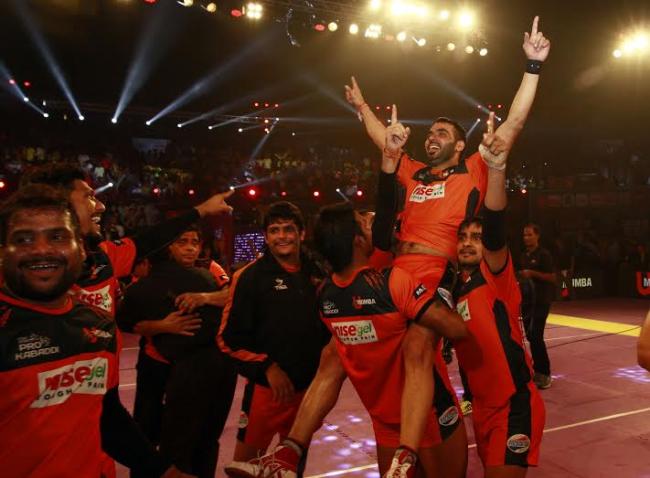 India Blooms News Service | | 23 Aug 2015, 11:58 pm
#U Mumba, # Pro Kabaddi
Mumbai, Aug 23 (IBNS): Shabeer Bapu Sharfudeen turned out to be the superhero for U Mumba as they were declared the ultimate champions of Star Sports Pro Kabaddi Season 2 on Sunday.

They beat Bengaluru Bulls 36-30 in a match that went down to the wire, proving to be a befitting finale to the tournament. Shabeer came up with a three point super raid that brought back Mumba back in the game.

The play started on a cautious note with the teams sharing as many points. The first session totally dominated by both the defences.

For Mumba it was Mohit Chhillar who gave Ajay Thakur a torrid time. He had him four times which kept him without a point to his name. Surender Nada and Vishal Mane with two points each were also effective.

Only Rajesh Mondal was successful in attack garnering a solitary point for Bengaluru. Shabeer and Anup managed to score three and two respectively in that period wherein the defenders ruled the roost.

A high-octane game, the match kept the champions on tenterhooks as Ajay Thakur of Bengaluru came up with a five point super raid to inflict an all-out against the Mumbai outfit. That was in the 33rd minute and with the scores tied at 23-23 - the script for a pot-boiler. Eventually the argument ended with captain cool Anup Kumar again proving his mettle, making the right moves at the right time even under pressure.

Bengaluru put up a tough fight but Mumba went on to consolidate their position with Rishank scoring three points. But Shabeer’s dismissal turned the tide in favour of the Bulls.

Though Joginder was out at the same time the Bulls managed to claw back with substitute Rakesh Narwal netting two raid points. Manjeet got one and then came Ajay’s first points of the match.

That was the 33rd minute. In hindsight that belated act of Ajay should have come a bit early. Shabeer returned the compliment and Mumba were back on the recovery path.

Manjeet tried his best to shore up his team’s chances but it came too late. As Bengaluru stumbled , Anup and Shabeer kept the score ticking to boost their side to 29-24 and 30-25. Manjeet went in to touch out Jeeva Kumar, Mohit, Surender Nada, Anup, Vishal Mane and Jeeva in that order in six Successive raids but it all went in vain.

Finally the battle of the defences was won by Mumba who showed their depth in both departments. Add to that the brains of Anup who kept his cool and at the same time came up with on the spot decisions which made the difference.

Runners up captain of the Bengaluru Bulls, Manjeet Chhillar was frank and honest. “I was happy with the way my boys performed today – they gave their heart to the game. Yes, we lost but it was a great match and the best final match one could have expected. We will be back next year.”

“Shabeer Bapu gets all the credit for the win because of his super raid and that turned the match. The Mumbai crowd were brilliant and we thank them so much for their support. We won because of that tonight. Manjeet is a good all-rounder and a good player. Whatever plan we had for him didn’t work and he played well. The celebrations were intense because we have been waiting for 1 year to win this trophy and now we have won it.”