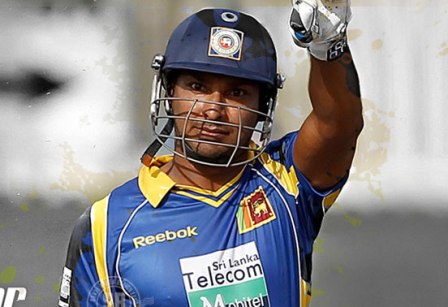 India Blooms News Service | | 23 Aug 2015, 07:29 pm
#Kumara Sangakkara
Colombo, Aug 23 (IBNS) Sri Lankan batting maestro and cricketing legend, Kumara Sangakkara on Sunday played the last official test innings of his life, scoring 18 runs before being dismissed by Indiaâ€™s Ravichandran Ashwin, here on the R. Premadasa International Cricket Stadium.
Sangakkara, who started off in 2000, made his debut against South Africa in a home series for the Lankans.

Initially a wicket-keeper, Sanga slowly proved his mettle with the bat as he went on to become a reliable member for the Islanders.

Over the years Sangakkara broke several records and created a few, some of which saw him rise rapidly through the ranks and equal himself with other cricketing legends.

At 34, he became the youngest member to deliver the MCC Spirit of Cricket Colin Cowdrey Memorial Lecture at Lord’s.
Related Images