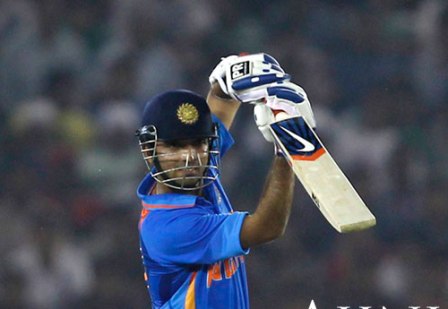 Chasing out to bat, Sri Lanka finished the day with 72 runs for the loss of 2 wickets and they still require another 341 runs to win the test match. Earlier in the day, Murali Vijay and Ajinkya Rahane, resuming on their respective overnight score of 39 and 28, played with grit and determination to provide a solid start for the visitors. The duo added 140 runs for the second wicket partnership, before Murali Vijay got out LBW by Kaushal. The Indian opener was looking to accelerate and perished in the process, scoring 82 runs off 133 balls. Virat Kohli came in next and could add only 10 runs as he too was trapped in front by the young Sinhalese off-spinner. Kohli departed for 10. Rahane next partnered with Rohit Sharma (34) and completed a fine century. The Mumbaikar hit 10 fours in his knock of 126 runs, having played 243 deliveries. Wriddhiman Saha remained unbeaten on 13 as the others batted around him to take the teams total to a sizable 325 for the loss of 8 wickets. Dhammika Prasad and T Kaushal picked up 4 wickets each. Prasad was accurate and gave away just 43 runs while the offie went for a plenty. He gave away 118 runs. Sri Lanka lost one of their openers early yet again as Ashwin removed Kaushal Silva for 1. He also accounted for Kumar Sangakkara’s wicket. Playing the last innings of his long and illustrious career, the Sri Lankan legend scored 18. Karunaratne (25) and his skipper, Mathews (23) negotiated the Indian attack to see their team through the end of day four’s play.