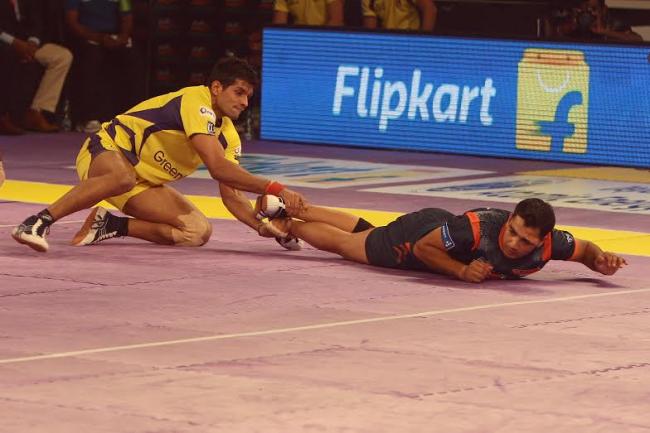 The Titans with this win take their tally to 34 points to maintain the second position on the table. The warriors remain seventh on the table above Puneri Paltan.

The Titans scored two all-outs or ‘lonas’, both in the first half. The first one put them up 12-4 and the next put them up 25-8 and firmly in the driver’s seat by the 18th minute.

For the Titans, they had come prepared after the unexpected draw yesterday against the holders Jaipur Pink Panthers. For the Warriors from the east it was their lone ranger Mahendra Rajput who put up a superb show of defiance. His tally of 14 raid points and 2 bonus points tells the story of his brave but futile struggle. The tall Maharashtra cop proved difficult for the Titans to arrest. He had a super raid to boot in his fight in a lost cause.

And how well did they execute the plans? If Rahul Chaudhari contributed 16 raid points with one super raid. Deepak Niwas Hudda showed his mettle as an all-rounder came up with five raiding and tackle points each. Then there was Mr. Consistent Sukesh Hegde always ready to shoulder the responsibility of the do-or die raids. His excellent footwork in stealing bonus points and the turn and tumble escape were techniques worth watching, especially for any aspiring youngster. Sukesh also showed his proficiency at the dive beneath the chain while returning safely.

As if this exhibition was not enough the 18-year Sandeep Kandola yet again showed why he is being hailed the next super star. He was a rock in the path of rival raiders who were trying to escape. The Iranian Meraj Sheykh led the side admirably and combined well with the rest of the defence to literally negate the Warriors attack of Dinesh Kumar and Vineet Kumar.

The former’s comeback hasn’t been on expected lines. Today he had three empty raids and after he was caught he was replaced. Vineet Kumar’s inability to get a single point till his eleventh raid also showed the weakness in the Bengal attack. Today’s loss weaken the Warriors’ chances of a revival in the league.