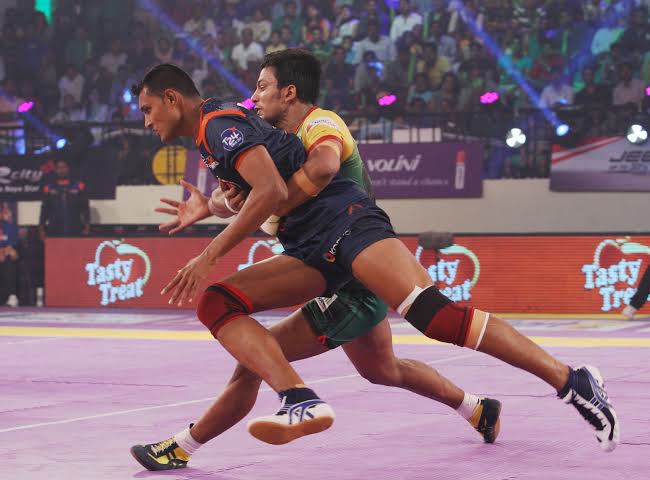 The proceedings were heightened by substitute Gurvinder Singh after he came on after the break with his side trailing 9-12. The Warriors relied on the South Korean Jang Kun Lee who contributed five points with a bonus to boot as he kept his side in the fray with a raid that fetched two points.

The first drawn game in Season 2 of Star Sports Pro Kabaddi gave three points each to the contestants. As a result Patna remains in fourth place with 20 points and Bengal move over Pune in seventh spot. They have 11 points in their kitty.

Sandeep Narwal, the home team’s captain failed to inspire his side as he with Ravi Dalal and Deepak Narwal and Dinesh and his fellow raiders failed to register a single point in the first ten minutes.

It was Vineet Sharma of the Warriors came up with the first raid point when he touched left corner Sunil Kumar taking the score to 4-3 in favour of the Warriors. With Dinesh getting out twice and Ravi Dalal and Deepak Narwal getting into the scoring act the scoreboard started moving albeit at a snail’s pace.

The second half was slightly better with Gurvinder showing a sense of urgency and Mahendra Rajput the tall Maharashtra cop who had replaced Dinesh scoring three there was something to shout for the spectators. Overall it the match ended on a better note for the hosts as the staved of defeat with Jan Kun Lee getting trapped during a do-or –die raid with his team having a 20-19 advantage.


The three points earned by Patna helped them remain in the top four and on course for a semi-final berth.