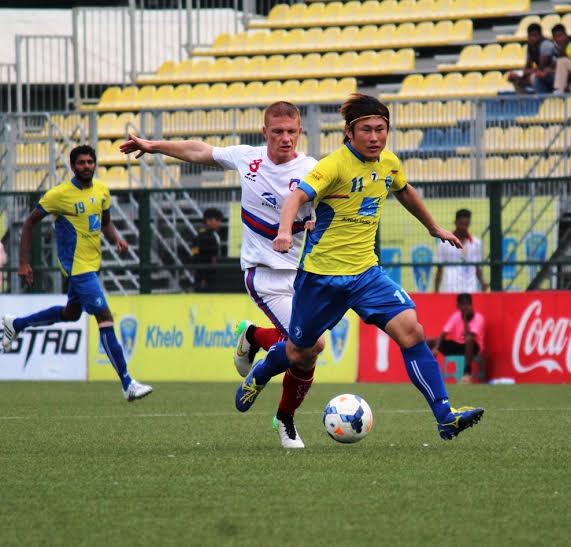 After Ashutosh Mehta gave Mumbai the perfect start by scoring in the 10th minute, Bharat FC’s substitute Omar Jaarun cancelled out the lead by scoring in the 70th minute before Taisuke from out of the blue stabbed in the winner at the death to give Mumbai a win.

Mumbai FC finished with 24 points and in 6th place, their best ever performance in this competition. For the Mumbai club this was the fifth win overall and fourth at home and they were also beat in 9 other games. Bharat FC finished at the bottom of the pile with 18 points.

Mumbai FC’s hero Taisuke was pleased to have contributed to the win. “I have always tried to give my best and I am fast and beat the rival defenders on speed to score the goal. It’s great that my efforts helped the team to win,” he said after the match.

Coach Jamil was all praise for the Japanese for the way he scored the goal. “Taisuke is a very clever and versatile player who can play in any position. Today he followed the ball and finished nicely with a good connect,” Jamil said.

“Taisuke is our main player and his presence on the field makes a lot of difference. He has scored some excellent goals and today his goal was outstanding. When he was injured we missed him greatly and the results are they to see,” added Jamil.

Jamil was also happy to learn that the Japanese star is keen to continue playing for Mumbai FC in the next season.

Mumbai FC started on a positive note and were more organised as they put together some neat passing bouts to apply pressure on the Bharat FC citadel. Their efforts found early reward as Ashutosh Mehta rose high over the rival defenders to firmly head home Climax Lawrence flag-king from the right in the 10th minute.

The home side continued to exert pressure of the rivals and could have added to the lead had they not wasted some gilt-edged chances. Brazilian striker Josimar Da Silva, Taisuke and Chika Wali failed to capitalise of some clear openings and they went into the break with just a solitary goal to show for their dominance.

The visitors were a transformed after the change of ends and worked to break through the rival defence and from a snap counter managed to find the net when Palestine striker Omar chased a long ball and beat the onrushing goalkeeper Kunal Sawant as he deftly lobbed towards the an open goal. Abhishek Yadav playing in a defensive role made a valiant effort to head the ball to safety but failed.

Bharat FC continued to search for another goal and went all out pushing more men up in attack. However, that ploy seemed to have backfired as they were caught off guard when from a swift counter Mohammed Rafi hurtled down the right channel and sent in a swerving centre across the rival citadel. Taisuke who stayed in sync with his teammate darted in and came up with a clinical finish, diving low to head the ball past defender Gourmangi Singh and goalkeeper Shahinlal Meloy to trigger celebrations in the Mumbai FC camp.