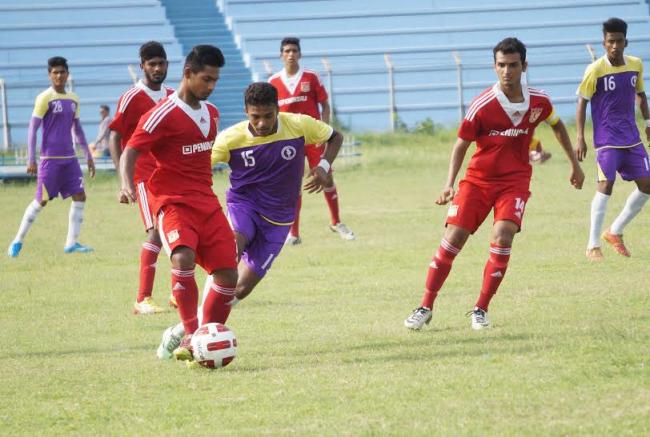 Playing at the different venue due to a change notified five hours before the kick off, Pune FC were handed their first loss of the competition as Azaharuddin Mallick (32nd, 62nd & 76th minute) and Sk. Azaruddin (83rd) struck four times for the home side.


Moreover, Pune FC played almost the entire second half with a man less after skipper Altamash Sayed was sent off in the 49th minute.


Playing their second game in as many days, Pune FC Coach Naushad Moosa made six changes to the squad.


Pune FC began the game on the offensive and created the first chance in the third minute itself. Altamash with some great footwork sent Pradeesh Clement clear on the left inside the box but the winger hit over from close range.


Ten minutes later, winger Sannik Murmu went agonisingly close. The youngster dribbled past three defenders to get into the box but his attempt was saved by the custodian.


As Pune FC pushed forward, United SC capitalised on the counter attack and took the lead on a breakaway move in the 32nd minute. Azaharuddin Mallick ran solo and finished off with a good shot to give the home a one goal advantage.


Pune FC didn’t give up and put further pressure on the United SC backline and almost pulled level in the final minutes of the half. Altamash’s curling effort on a freekick just outside the box went inches over the framework as Pune FC went into the breather trailing by a goal to nil.


Coming out with the intent of getting an early equaliser, Pune FC were hit hard when Altamash was sent off four minutes after restart. The skipper was elbowed by an opponent and reacted instinctively which was noticed by the referee who flashed a direct red card.


Thereafter, Pune FC were forced to chase the game with ten men in sweltering heat as United SC preferred to hold back and move ahead on counter attacks.


The home struck three more times through Azaharuddin Mallick (62nd and 76th minute) and Sk. Azaruddin (83rd) in the final quarter to wrap up the win.