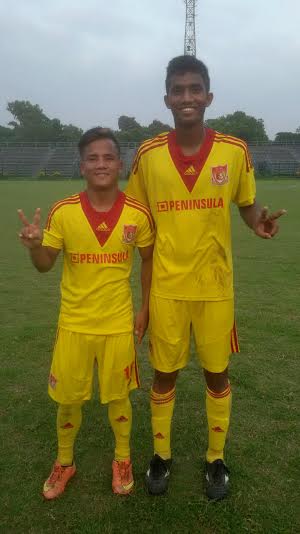 The win also meant Pune FC (3 pts) moved to the top of Group-B ahead of Mohammedan SC (1 pt) and Mohun Bagan (1 pt) and effectively qualified for their first-ever semifinals in the IFA Shield. Moreover, having scored four goals, Farukh also became the top-scorer in the competition after just one game.

Pune FC had a perfect start to the game taking the lead in the 2nd minute. After skipper Altamash Sayed’s freekick came off the cross bar Farukh reacted quickly to tap in the stray ball. However, the joy was short-lived for Pune FC as Bagan struck back two minutes later through Pintu Mahata who capitalised on a defensive lapse.

Nonetheless, as soon as the game restarted, Pune FC restored their lead immediately in the fifth minute. Once again, it was Altamash’s set up that was finished off by Farukh for his second goal. However, at the other end, Bagan equalised once again in the tenth minute as Vivek Singh scored from close.

Despite four goals in ten minutes, both sides continued to push further up in search of more goals and it was Pune FC who struck again. Attacker Chesterpaul calmly slotted home a pass from Arif Shaikh to put Pune FC a goal up for the third time.

Thereafter, Pune FC continued to dominate proceedings and were rewarded with another goal in the injury time. This time Chesterpaul turned provider for Farukh who completed his hattrick with a sublime finish to give Pune FC a 4-2 lead going into the breather.

The second half too exploded with action early on. Two minutes in, Farukh converted winger Pradeesh Clement’s pass to score a record fourth goal and give Pune FC a 5-2 lead.

Pune FC did create a few chances late on but fell short of converting them and had to settle for a 5-2 win.